The Rangers were spoiled last postseason, playing games that were fairly well decided before the final outs were recorded. Outside of a blowout loss to start the playoffs, 2011 has been the complete opposite. Fortunately, at the same time, the Rangers have won each of those games.

Game one was played in three parts, thanks to rain delays. Part one was the Rangers clicking on all cylinders, getting to the Cy Young in waiting, Justin Verlander. Texas consistently worked quality plate appearances against the ace who has otherwise been treated as an automatic win in the playoffs, getting five hits and two walks off of him, and driving the pitch count early. The combination of a Napoli single, Murphy triple, and Kinsler single gave the Rangers a 2-0 lead in the second, and a Nelson Cruz home run (finally) tacked another run on in the fourth. At the same time, C.J. Wilson was cruising with six strikeouts through for innings, no runs allowed, and the Rangers were in firm control to start the ALCS up 3-0.

Then came the rains, putting what was starting to seem inevitable on hold. When the rain lifted, Wilson went out to protect his three run lead, and instead fell apart. It may have been the weather, it may have been the time off, it may have been the tiny strikezone that both teams dealt with all night, or it may have been Wilson just suddenly being awful, but two doubles two walks, and a wild pitch gave the Tigers two runs in the fourth. Ron Washington chose not to even have a reliever ready, which seems a mistake in hindsight, and then called for a very questionable intentional walk to load the bases with two outs.

Then the rain came back.

The delay meant perhaps the most kvetched-over pitching change in Texas Rangers history. Should Alexi Ogando come in regardless of left-handed Alex Avila coming up? Should it be Darren Oliver? Mike Gonzalez? Should Ogando have been brought in to face Magglio Ordonez, avoiding an intentional walk? Would this game even be finished Saturday?

Finally, the weather cleared, Mike Gonzalez was the choice, and he quickly induced an anti-climactic Avila ground-out to end the threat. Thus began the third portion of the game, the stress-inducing stalemate.

The long delay meant Verlander was out of the game, which seems like a win. Given how the Rangers hit Verlander and how they hit the Tigers' bullpen afterwards, that might not be true. Rick Porcello and Ryan Perry combined for three and two-thirds perfect innings, as the Rangers flailed away at bad pitches for quick outs. A Mitch Moreland single off of Phil Coke in-between, and a flyball Kinsler just missed on formed the closest thing to highlights for the offense the rest of the way.

Fortunately, the Rangers' bullpen provided everything fans have hoped for since their mid-season acquisitions. After Gonzalez's one batter, Alexi Ogando -- October's bullpen ace -- came in for two dominant innings of three strikeouts, one walk, and no base hits. Darren Oliver faced lefties Don Kelly and Avila, making short work of them with a strikeout of the latter, before Mike Adams came in to make Jhonny Peralta look silly on a strikeout of his own.

Texas remained down a run, before Neftali Feliz came in. What happened next was magic.

The inning began with the only base hit the Tigers managed off of the bullpen, and it came in the form of a nifty Ramon Santiago bunt hit. From there, Feliz turned in perhaps the most dominant inning of his young career. Wilson Betemit pinch hit, and had no prayer. Feliz went up the latter, dialing his fastball up slightly on each pitch -- topping out at 99 miles per hour -- and Betemit swung at all three for a short, ridiculous plate appearance. Austin Jackson at least saw a ball, but he also saw a fastball that topped 101, and nothing below 99, and also swung and missed at three pitches before having a seat. Against Ryan Raburn, Feliz mixed in two cutters, and needed three pitches, but the result was the same: strikeout swinging.

Three swinging strikes that must be seen to be believed. Feliz did not just strike out the side to give the Rangers the lead in the series, he made the Tigers' hitters look comical with seven swinging strikes in one inning. People have high hopes for what Feliz can be as a reliever, but this was another level altogether. It capped off a glorious night for the Rangers' bullpen, as the group came through to protect a tight lead in the biggest game of the season yet.

So now Texas has a one game lead in the series. Hopefully they get three more without their feeling like this, but they have knocked off the Tigers' best pitcher to get the first. It should go without saying that this is a huge boost to Texas's odds of winning and now they just have to .500 to clinch the division and all that stuff. It should also go without saying that the ALCS is far from over, especially if the Tigers can play the Rangers this close every night. 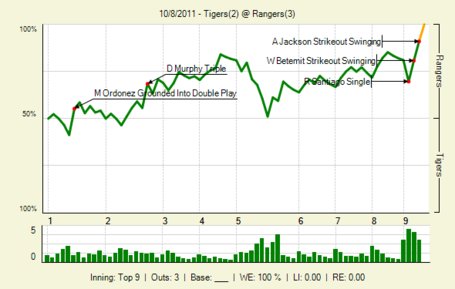 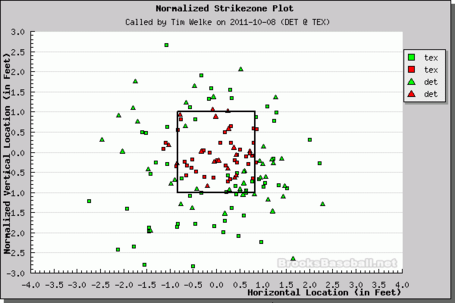