Game five of the 2011 World Series will be forever defined by two huge moments, and each involved a man cast off from the former class of the AL West for garbage.

The story of this game was another thrilling addition to likely the best World Series played since Luis Gonzalez floated a ball over the head of Derek Jeter. The Rangers faced an early 0-2 deficit, tied the game with just 10 outs to go, and finally went on to victory. But it was made in the last six outs of the contest.

The Rangers' eighth began with the Cardinals' big bats up in the 9th, and Michael Young at the plate. Octavio Dotel was brought in for relief, and Young helped people once again forget how awful he has been in the postseason with a lined opposite field shot, splitting the outfielders for a double.

Next was Adrian Beltre, the reason the Rangers were tied. Beltre had spent the entire game timing Chris Carpenter's curveball by going to one knee, and finally timed it right by launch a game-tying home run with two outs in the sixth. That bought him plenty of good will -- and was hilarious to watch -- but here he struck out. An intentional walk of Nelson Cruz brought up David Murphy.

Tony LaRussa went to Marc Rzepczynski for platoon advantage, and Ron Washington -- no doubt remembering the failures of Torrealba and German -- stuck with his lefty. In practice, Murphy failed, hitting the first pitch he saw on the ground. In actuality, the ball was twice misplayed, the bases were loaded, and the man who would be king was up: Mike Napoli.

We all know Napoli crushes lefties. It is right there with death and taxes. It is just what he does. Yet, Tony LaRussa left in Rzepczynski to face him. In perhaps the biggest at-bat of the postseason, Mike Napoli was getting to face a lefty with the bases loaded. The stadium filled to the brim with the chants of NA-PO-LI. Really, the fact that the ball was kept in the park has to be a small victory for the Cardinals.

It was not a grand slam, but Napoli hurt LaRussa's managing with a double to the wall scoring two, making him the second player ever with four multi-RBI games in a World Series. The first player was Mickey Mantle. More importantly, it gave the Rangers the lead. It took some amazing work -- and luck -- to get there, but the Rangers were three outs from pushing St. Louis's backs against the wall.

Supposedly, LaRussa wanted to go with Motte. It would make sense to bring in his righty relief ace there, instead of allowing Napoli an opportunity to build his growing World Series MVP resume. Supposedly, the Rangers Ballpark in Arlington crowd was so loud, it made a call to the bullpen difficult. That is a bit hard to believe, but as Christopher suggested in the Lone Star Ball postgame discussion, it is something a Rangers fan should want to believe. The idea that Rangers fans inserted themselves directly in to postseason lore is. . . intense.

Of course, the game was not over there. Neftali Feliz had to close it, and he struggled immediately by hitting Allen Craig to bring up Albert Pujols as the tying run with no outs. After a long battle with Pujols, Tony LaRussa called for a hit and run, and Feliz made Pujols swing miserably for the first out. The Albert Pujols. The unbeatable machine that Washington has insisted on walking as often as possible. In such a huge situation, Feliz struck out one of the greatest right handed hitters in the history of baseball.

Meanwhile, Napoli inserted himself again in to the game, this time nailing Craig with miles to spare at second after the Pujols whiff. It was, by the way, the second time Napoli gunned down Craig -- easily -- while trying to steal. Mike Napoli, of course, cannot play catcher.

The Cardinals got another baserunner, but two outs with Pujols gone is a completely different situation. Feliz struck out Lance Berkman to win the game, and the Rangers found themselves up 3-2 in the World Series.

These were the big moments, but they were not all that mattered. They had plenty of support. The first run came from Mitch Moreland -- benched through most of the postseason -- hammering a Chris Carpenter pitch deep in to the upper deck. There was the usual Great Wall of Beltre, some nifty fielding by Elvis Andrus, and a couple of Ian Kinsler walks.

C.J. Wilson was a combination of bad and held back by a zone that was noticeably smaller for him than it was Carpenter, but he was also at times good and at times lucky. He unfortunately did nothing to endear himself to critical fans it what may have just been his last start ever as a Ranger, but Cardinals also scored only two runs off of him. Luck and defense played a part in that, but at least his last start -- if it was indeed -- will not go down as a game five loss. Alexi Ogondo had similar struggles, with fortunately little damage, but Darren Oliver and Scott Feldman locked down the Cardinals to get the game to Feliz.

And just like that, the Rangers are, again, closer than they ever have been to a championship. They won a game that at times they seemed destined to lose, but now have two shots at winning one game for a world title. There is no other way to put what the next game (or two) mean. A simple win and things change forever. 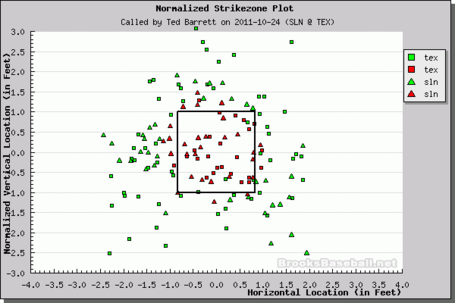