Derek Holland's mustache is filling in.

Oh, and he pitched eight and a third shutout innings to get his team tied 2-2 in the World Series.

Derek Holland was one of the elite prospects in the early days of Jon Daniels's rebuilding project. He was drafted in the 25th round, signed a year later, and had a 6.13 ERA in his first professional season, before tinkering with his release to become a fire-balling strikeout machine. The Lone Star Ball community once even ranked him first in the system, ahead of even Neftali Feliz and Elvis Andrus.

Consider the start just beyond the 8.1 IP, 7 K, 2 BB, 0 R line. He did not just go through some run-of-the-mill offense, the Cardinals lineup is good enough to likely rival even the Rangers' when you give them a solid DH (and Allen Craig may be better than a solid DH), with a No. 3 hitter who just crushed three homeruns against his teammates the night before. Seven strikeouts is nice enough, but it looks even better when you realize the Cardinals' 15.7% K rate was higher only than the Rangers in 2011

Holland's location was magnificent, keeping the ball low, and getting the Cardinals to repeatedly put the ball on the ground. When he wasn't striking someone out, they were grounding out harmlessly to the infield. Only two balls thrown by Holland even needed an outfielder to take care of -- neither particularly threatening -- and his rare relatively-hard-hit contact was taken care of by Ian Kinsler or Adrian Beltre.

No one outside of Lance Berkman, by the way, had a hit; and Berkman's single was quickly erased by a double play. Even the mighty Albert Pujols -- who some probably argued should be pitched around after last night -- was handled relatively-effortlessly by Holland. It was a start that fit the definition of dominant, and without it the Rangers might well be staring down the barrel of elimination right now.

In short, on Sunday night, Derek Holland did to St. Louis baseball what DeMarco Murray did to St. Louis football, and now he will forever live as a legend in Texas postseason lore for his help.

He needed little offensive support, but he got enough. Really, the Rangers better than four runs scored suggests, with 14 baserunners (eight walks), while finding the warning track with four different fly balls, including a first inning David Murphy blast with the bases loaded. It looked like Edwin Jackson would be blown apart in the first inning after Josh Hamilton doubled in a run with one out, and Texas loaded the bases for Murphy, but it Jackson continued to skate across thin ice unharmed.

Tony LaRussa was unwilling to let him skate for too long, however. After consecutive walks, he pulled Edwin Jackson for Mitchell Boggs to face Mike Napoli. Joe Buck said something about Boggs being great when he locates, and Tim McCarver said something about his pitch needing to be down. His first pitch was up, and Napoli deposited it on a glorious arc in to the upper deck of left field, giving Derek Holland runs he did not even need.

It was pretty cool at the moment, though.

It is easy to say things like "it is a whole different series now," and also overstated, but it is true. Game-to-game the series changes. Monday morning, the Rangers could have been praying for a miracle, but instead they will be looking at a home game with a chance to take firm control of the World Series.

Because Derek Holland showed up and came through. 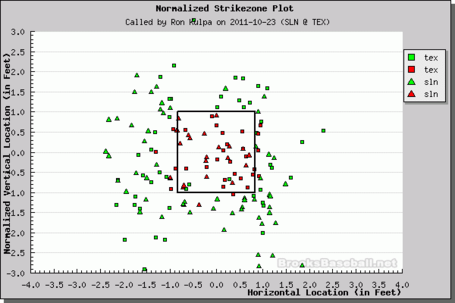 Rangers Even Up World Series With 4-0 Win