If you do not want to read about Major League Baseball officiating, do not click the jump.

Should the Rangers win today or tomorrow, Wednesday will be game six. It will come 26 years to the day of the Cardinals getting jobbed by an umpire in a World Series game six. 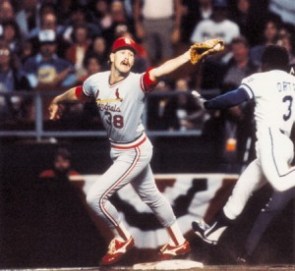 Last night, the Cardinals got some small measure of payback from umpires, though certainly they could not be called squared. It also, unfortunately, came not at the Royals' expense, but at the expense of a team with 10 fewer titles than St. Louis has enjoyed.

It also was not even as close. 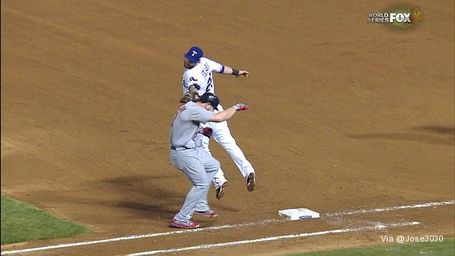 The worst thing that happened for baseball fans last night was the Rangers' bullpen. If Texas relievers could have kept game three close, then media everywhere would have no choice but to look at Ron Kulpa's incorrect call as one that may well have cost a team a World Series game. If ever there was going to be clamoring for change in how baseball is allowed to conduct its officiating practices, this was going to be it.

Instead, the Rangers made the game a blowout, people will make the argument "they would have lost, anyway" and the call was irrelevant. That misses the point entirely, and allows for a silly cop out ignoring a massive problem with the game of baseball.

More than a quarter of a century ago, the Cardinals were almost certainly cost a World Series title because of a blatantly incorrect call. Despite massive progress made in video and communication technology, we are still in the same situation today, where human error can affect a game in ways it never should be, and baseball ignores it because the vast array of fans ignore it because the media ignores it.

The issue is not an expectation of humans to be perfect. That play looks pretty bad, but who knows if we could make the call as untrained professionals. The issue is that humans -- even the best of them -- struggle with the demands of officiating correctly, and despite the available technology to aid them, baseball refuses to use it. Major League Baseball, at least. College baseball is okay with it. I don't see how that isn't embarrassing for the big boys.

None on with two outs in the fourth inning is a Win Expectancy of around 41% for the Rangers down one. The incorrect call meant a Win Expectancy of 39%. Big deal, right? Sure, possibly.  But if the correct call is made, Lance Berkman singles with no one on. Matt Harrison pitches to Yadier Molina, where the likely result is an out, and Texas probably gets out of the inning still down just 1-0. Certainly Mike Napoli is not throwing home in a one-out/bases-loaded situation.

Do the Rangers definitely win? Of course not. Do they likely still lose? May be. The point is that we just do not know, and doubt about how a game could have ended up should never hinge on incorrect calls by the officials.

People will say the human element is what's fun in sports. They are correct: it is really fun watching to see if athletes can do the unpredictable. We don't watch to see if an impartial observer can correctly call the rules or see what happened.

People will say replay will take too much time, or suggest it has to be like the NFL. That's ridiculous, there is no sane reason you cannot have wireless communication with a booth official reviewing close plays. You can even outlaw arguments on close plays to actually save time.

Rangers fans should be at home this morning happy over a win, or upset because their players failed. They should not be wondering -- maybe for the rest of their lives -- what could have been if someone was simply given the easily-available tools to do his job. Cardinals fans alive and watching in the 80s should not be wondering today what might have been if Don Denkinger did not guess incorrectly on when the baseball reached Tim Worrell.

The technology is out there, and the reasons for it are obvious. There is no reason one cannot simultaneously acknowledge Texas might have lost anyway, while also pleading with baseball to eliminate the word "might."

Those of us who pay enough attention to notice what a mockery base makes of its sport with its clinging to the human element are the only hope. Who knows how slim the hope is, but unless we keep crying for change, change has no reason to come. Every single unfortunately-rare argument you find for why this is a bad thing should be read and shared with everyone who will read or listen. For the good of the game, this stuff has to be called to the attention of fans and media so maybe we can get something out of an uproar, and maybe we can never again see a World Series game where the simple technology of replay is not used to keep a game from being in doubt because of people not even playing in it.

Please. Not from a Rangers fan, but from a baseball fan. This has to end.