There is an obvious story to be told from game three. Hopefully, more of the media will cover it than usual with these things. Just for the moment, just for this recap, only the players on the field.

The Rangers offense was there. They put to bed any concerns there was a World Series hitting malaise, and reminded people what they can do when not in cold pitchers' parks without a DH. They scored seven runs, and with almost a quarter of their balls in play (per FanGraphs) hit for line drives -- which just about matches the eye test of several hard hit balls straight at fielders for outs -- they were probably unlucky to only score seven. Enough to win most games. The offense is fine. The offense was not the issue. More timely hits would have made game three less of a blowout, but that is nitpicky.

What was not fine was the bullpen and the defense. After the call-to-be-discussed-later, Texas found themselves with one-on and one-out in the fourth, down 1-0. They were down 1-0 because of an Allen Craig home run in the first, but otherwise, Matt Harrison was pitching well, getting a strikeout an inning against no walks.

At this point, the Rangers were underdogs in the game, though not by a whole lot. Their Win Expectancy was just under 40%. Considering the relative strengths of the team and homefield advantage, it was likely closer to average, perhaps even favoring the Rangers. After the awful call, Texas was in a position where no one should have been surprised if they lost, but they were also not buried and done. They buried themselves after.

Mike Napoli played at first so Yorvit Torrealba could start. That was a decision that may well have backfired. After a double made it 2-0 and the bases were intentionally loaded, Napoli fielded a ball at first, threw it wide, and Torrealba could not corral it, allowing two runs to score. A follow-up single made it 5-0, and the Cardinals were now in dominant position. It should never be forgotten that Napoli is not trying to make a throw home with the bases loaded and one out if not for an incorrect call, but it was a poor defensive effort that seriously cost the Rangers.

From there, Albert Pujols destroyed the Texas bullpen. No reliever the Rangers could bring in was effective. Mark Lowe was the best, only allowing a single run in his inning. Scott Feldman allowed three despite keeping the ball in the park. Mike Gonzalez (2 ER), Darren Oliver (1 ER), and Alexi Ogando (3 ER) each allowed a homerun to Pujols, allowing him to add to his legend with five hits while becoming the third player ever to hit three homeruns in a World Series game.

That was that. The offense kept scoring and giving hope, but the bullpen could not handle the Cardinals. Texas lost by more than the four runs allowed in the fateful fourth inning. There is reason enough to believe they would have lost anyway, and if that makes you feel better about the game, cling to it.

There is no way to avoid saying this game hurt. On paper, this was probably the most Rangers-friendly game in the series, and -- for whichever of many reasons you want to blame -- they lost it. They are down in the series, needing to go 3-1 against a good team -- with two on the road -- to win the series. One more loss, and they are facing elimination. All these things are known, understood, and depressing.

There is reason to be okay, though. The series is also far from over. The Rangers are the better team, and nothing that happened tonight should dispel that notion. The offense showed up. The starting pitcher showed up before things out of his control screwed the whole thing up. The bullpen was bad, but we have just recently seen it be good. This was not a "Texas can't show up in the World Series" game. It was just an unfortunate game.

The Rangers should still be considered the favorites in three of the next four games, and likely close in the fourth. 3-1 is a depressing run to need, but not one anyone should be panicking over. Running the same model used in the series preview for the rest of the games (with a mediocre Josh Hamilton) gives Texas better than a two-in-five chance of winning still. Win tomorrow -- as they probably should -- and even without homefield advantage, they are back to being favorites.

This is bad. No one should expect Rangers fans to be happy. This game will be haunting forever if they fail for a second straight year. But it is not time to be haunted yet. It's time to be thankful baseball gives us another shot so quickly, and hope Texas can take advantage. 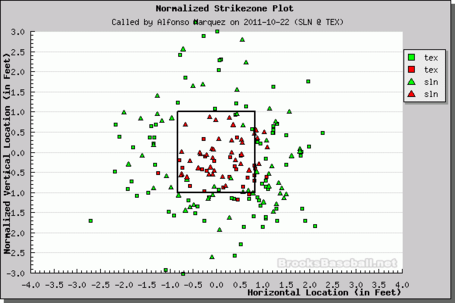