Four runs. That is all the Cardinals could muster in their two games against the Rangers. Significantly less than Texas averaged in a season offensively, and yet it was enough for St. Louis to manage a crushing 2-0 series lead.

This was the narrative being written as the Rangers began the ninth inning of game two, their chances of evening up the series appearing bleak (just look at the graph!).

This was a game marked by horror. The offense could not muster anything about Jaime Garcia. Garcia is good, but he is not seven strikeouts and three hits through seven shutout innings against the Rangers good. The ballpark, the weather, the Hamilton injury, NL ball and probably some stuff like luck and being overly-amped for a big game conspired to make the Texas lineup a shadow of its typical self, and Garcia took advantage.

Thankfully, the Cardinals' lineup experienced the same thing, and Colby Lewis was up to the challenge. The only thing standing in the way of another great season from Colby Lewis this year was his outrageous fly ball rate, but cold weather in a massive ballpark made those flies non-factors. Lewis got four strikeouts, allowed two walks and little hard contact, and left with two outs in the sixth and no runs allowed.

The problem was, he left with two outs and two on, thanks to a David Freese single, followed by a good old fashioned Past A Diving Michael Young®. Playing to hold the runner, Young failed to get in to proper position on a Nick Punto ground ball, and runners were at the corners when Alexi Ogando was brought in to face a pinch hitting Allen Craig for the second straight night. And for the second straight night, David Craig came through, giving the Cardinals a late 1-0 victory, seemingly all the Cardinals would need.

There are more heroes than Colby Lewis on this night, though, and those heroes are the Rangers' incredible double play tandem. For most of the game, Ian Kinsler was the Rangers offense. He represented fully half of the Texas baserunners, with a walk and two singles. Elvis Andrus struggled at the plate for most of the evening, but he excelled in the field. The young shortstop had two thrilling grabs behind second base, with glove flips to Kinsler, the first in the fourth for a double play, and the second in the fifth to save a run with two on. The duo were pure magic in perhaps the biggest game of their career.

The ninth was close thanks to their defensive performance, and was lead off by the pair. Ian Kinsler started against closer Jason Motte with a soft fly ball that Rafael Furcal could not run down. It was said in the series preview that the two teams -- on paper -- are dramatically different defensively, and that could well be what makes a difference in the series. Tonight, that was seen directly. Two of Kinsler's hits came because Cardinals infielders could not get to balls that a Rangers infielder likely would, while Kinsler and Andrus had repeatedly turned in great plays up the middle to save the game. Now, Furcal's inability to run down a pop fly had the tying run on base.

The magic continued. With Andrus up and showing bunt, Kinsler stole second just under the tag. A pitch after Tim McCarver called the exact thing due to a poor defensive alignment, Andrus roped a ball to right, and thanks to Pujols deflecting the throw in, collected second base with Kinsler at third. He had struggled at the plate, but with one of the biggest hits in the history of the Rangers and some incredible glove work, Elvis Andrus had become a hero.

Next came outs, but good outs. Josh Hamilton brought in Kinsler with a sac fly, advancing Andrus, and Young redeemed himself with one of his own. In the last inning, the Rangers had suddenly -- and finally -- taken the lead in astounding, tight, and dramatic fashion. Neftali Feliz walked the first batter (perhaps due to not being given enough time to warm up), but then retired the Cardinals with ease to end it. Without a lucky hit, a close steal, or Albert Pujols being out of position twice, the Young and Hamilton fly balls are harmless outs leading to a two game deficit. Instead, the Rangers go in to the off-day in great position.

These are words of a recap. They cannot capture the emotion that just came out of probably the most dramatic game in the history of a franchise. A frustrating and miserable experience became a victory seemingly out of nowhere, in tremendously unbelievable fashion. On the strength of its middle infield and a disappointing pitcher, the Rangers won when at times it felt impossible.

This is what people want in the postseason. Fans of 28 other teams have seen a thrilling open to the series. Rangers fans, meanwhile, are breathing a collective sigh of relief, and Cardinals fans are stressing about how close they were to an incredible start.

Without Young and Andrus's play, Texas is needing a minor miracle to win the series. Instead, they have gotten a split on the road against their opponents' two best pitchers, and go home with an even more comfortable position in the series than they could have expected before the games had been played.

The Cardinals and Rangers both have tremendous pitching and hitting. The Rangers, however, take the idea of complete team beyond those two factors, and Thursday night it brought them a step closer to a World Championship. 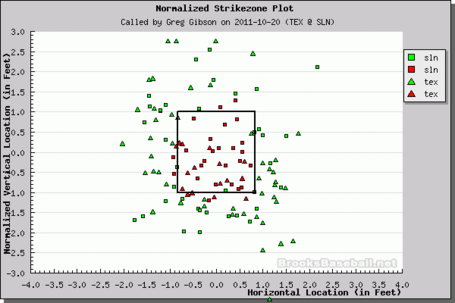 Rangers Come Back From Behind, Win 2-1 In Game 2