Share All sharing options for: 2011 World Series: Morning After Thoughts On Game 1

But, it cannot be said enough, things are not over. I do not think anyone expected a sweep, and if you did not expect a sweep, I'll bet Chris Carpenter in St. Louis was just about the first or second game you'd expect to lose. As long as it was in the top three, you should still feel mostly okay.

The Rangers' chances of winning the World Series went down, of course, but how much is up to question.

If you read the series preview in these parts, you saw a given 68% chance of winning the series (a little lower if you assume each league is equal). If you switch the Cardinals' to always winning game one, then the Rangers actually still come out favored, though now by a slim 53% chance. The same, by the way, was true after they lost game one to the Rays, and how did that turn out?

The reason is partly because they are the better team, and game one, ugly as it was, did nothing to dispel that notion. Another reason is game one did not heavily favor the Rangers at all, and that was with the regression applied being none-to-kind to Chris Carpenter. If you assume his 3.48 ERA to be more like his true talent -- or assume C.J. Wilson to actually be a playoff choker or something -- the Cardinals come out favored in the game, but the Rangers still come out favored in the series. Meanwhile, if you think Colby Lewis can pitch dramatically better in a pitcher's park than his norm, the Rangres come out favored in game two.

In other words, it is not difficult to imagine the Rangers should have been expected to lose last night, and still expected to win the series. That does not mean last night's game didn't hurt. It hurt a ton. But it also is far from crippling. From the way this series stacks up, facing elimination should be the first time for Rangers fans to panic, not necessarily 0-2 and certainly not 0-1.

On a second note is Ron Washington's in-game decisions.

Walking Nick Punto with a runner on second and the pitcher on only raised the Cardinals' Win Expectancy by 0.5%; and that assumes equal hitters, the drop from even Nick Punto to a pitcher is massive. This was likely the right call, and at the very least not one worth screaming about.

Esteban German pinch-hitting rather than Yorvit Torrealba is questionable, though also not clearly wrong. German is likely a better hitter, but he also hasn't seen game action in a long time. It is up to the Rangers to tell if he's ready, and hopefully they know what they're doing. If not, that's bad.

Walking Albert Pujols with a runner on to get to Matt Holliday in the fifth was emphatically the wrong decision. We just talked about this. Albert Pujols is really scary, but the Cardinals odds of scoring runs are better with two on and one out than they are with one on, even when it means avoiding Pujols. Especially when the man behind him is Matt Holliday, who is also one of the better hitters in baseball, and was better than Pujols this season, anyway.

Holliday immediately grounded in to a double play, making it look like the right decision, but that wast he Rangers' good fortune. Holliday's chances of only getting one out -or worse, a hit -- are better than his chances of hitting the ball on the ground. Washington did not have a way of knowing Holiday was guarantee to hit in to a double play. Before deciding this was the correct decision because it worked, refer to the following chart: 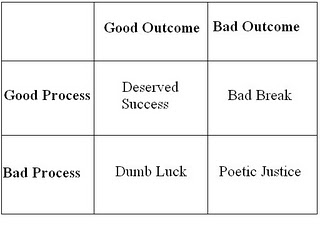 You do not evaluate the quality of decisions made by their success in hindsight, unless there is some way the decision makers could have known what would happen.