With the Texas Rangers' pursuit of World Series title No. 1 and the St. Louis Cardinals in pursuit of No. 11, a lot is at stake, and as always, it's expensive to witness live drama. Overall, the Rangers fans seem to want it a bit more (buy tickets here), as they are paying a series average of $898 vs. the Cards series average of $777 (yes, Vegas, $777). Despite the high prices in in Arlington, they are still 27 percent below last years average of $1,244. As for home series openers, the Rangers win this battle within the price war running away: $1,021 avg. price for Game 3 vs. $575 avg. price for Game 1.

Without the fiscal abandon that came with the Rangers fans' first-ever World Series appearance and the Giants Baseball: Torture, the average price across the entire series is down considerably, at 35 percent. While Cards fans are understandably giddy about their ‘Happy Bus-Rally Squirrel' run, this is their third World Series in eight years. Throw in a still precarious economy, and the Cards World Series 2011-edition is featuring much more Pizza, Beer and Couches than 2006 or 2004.

Yet, despite the allure of 50 Inches and saving some serious coin, seasoned Cardinals fans - and ticket sellers - know that high-drama demands a high price. If it comes down to a Game 7 at Busch, the average price moves into four-figures. For a walk-off series winner, it would feel like a bargain.

With the match-up for these storied franchises, TiqIQ decided to take a look at how the demand for tickets is reflected in ticket prices for each game of the Series. To do this, we charted the average price for the 7 games. 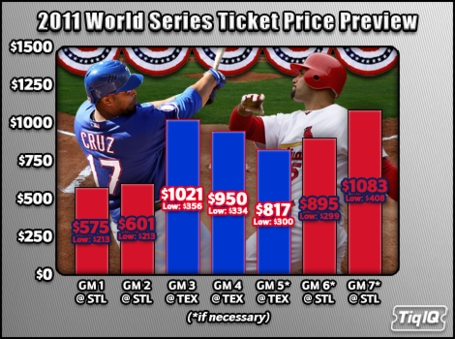