Tickets To Games 6, 7 Of ALCS Trending Back Upward

The Rangers and Tigers are heading back to Arlington, driving ticket prices back up for the two potential clinchers.

Share All sharing options for: Tickets To Games 6, 7 Of ALCS Trending Back Upward

Through SB Nation's ticket partner TiqIQ, there are still plenty of affordable tickets. There are standing room-only tickets available for $81 for Game 6 and tickets for as low as $82 in the upper deck for Game 7.

Tickets for both games have been on a consistent downward trend for the past week, when they started out around at well over $300 for both games. Tickets for the games essentially started heading back up once the Tigers won Game 5 and forced the series to return to Arlington. The Rangers currently lead the series 3-2, meaning local fans could see their team clinch a spot in the playoff in either game. 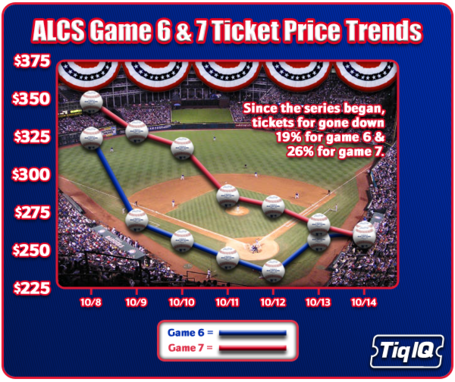