Cruz Missiles, For The Win

Share All sharing options for: Cruz Missiles, For The Win

Sometimes, a lot of words just detract from what happened.

What happened Monday night was this: Nelson Cruz became a hero.

Derek Holland picked a horrible time to be a bad pitcher, but the Rangers' bullpen -- for the second straight night -- stepped up, and kept the Tigers from scoring for almost an entire game's worth of innings. The offense struggled to bring runners home after the first inning, despite facing a pitcher with a glaring flaw the Rangers were ripe to exploit.

Cruz, however -- who finally broke out the night before with a homerun -- would not let Max Scherzer leave without a home run, and tied the game with a solo shot in the seventh. He survived a hit-by-pitch that went wasted, but then launched the most significant homerun in the history of his franchise to date.

Recapping the game with stats, analysis of the moments, or criticism of the players who made the game close only detracts from the greatness seen on the field in game two. Rewatch the highlights over and over, and discuss the game with Lone Star Ball's hardcore group of fans. That is the best way to appreciate a game like this. Analysis can come later.

Nellie Cruz had an incredible postseason for a team that fell just short a year ago. After a poor ALDS, he has made himself the favorite for ALCS MVP by many miles. Three homeruns in two games, and without them the Rangers are 1-1 at best, quite possibly 0-2. He is a hero in his fans' great time of need.

This was, it should be mentioned, a game that would have hurt to lose, more than simply falling to 1-1 suggests. Scherzer in Arlington and an injured Tigers' lineup favors the Rangers in a dramatic fashion for an ALCS game, and handing perhaps the game that favors them most in the entire series over to Detroit would have been horrible for the chances of a World Series repeat. The next five games feature three pitchers who threw like elites in 2011, three games on the road, and perhaps Colby Lewis in Arlington. Avoiding the need to go 3-2 in those games by winning two games in their favor was not just huge for the Rangers, it may have even been necessary to maintain their status as favorites.

Thanks to Nelson Cruz, that's not an issue.

Anything better than 1-4, and Texas repeats as AL Champs.

[From the great Drew Sheppard.] 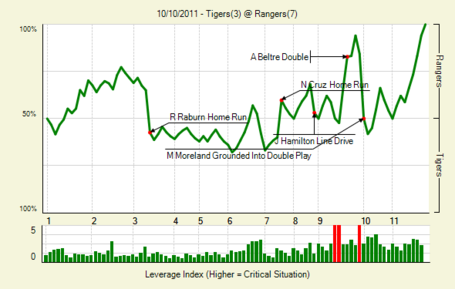 Biggest Contributions (What is this, I don't even. . .) 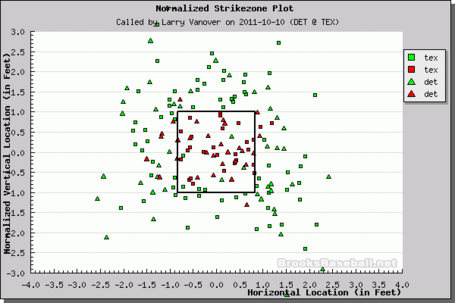