We still have a series.

Saturday night was a weird game between the Rangers and the Rays. Texas at times made victory seem hopeless, assured, and in danger all over again through the same game. In the end, what mattered was they won, tying the series at one.

First blood came from the Rays' hero so far, Kelly Shoppach. Derek Holland allowed just one run in the first inning, but he showed all the reasons to be afraid he was out of it in game two. A double, a walk, and a single loaded the bases, and a second walk in the inning scored a run. He recovered, though, and was fine for another couple of innings, before his own error put Casey Kotchman on with two outs in the fourth, and followed that up with a high fastball that Matt Joyce turned in to a homerun, giving the Rangers are early -- and painful -- 3-0 deficit.

That was when it felt hopeless. Fortunately, the hopeless part did not last long, because the fourth was also when the offense got to James Shields. The runs came in fun and strange ways. Elvis Andrus lead off with a hit-by-pitch. Josh Hamilton singled up the middle. Michael Young singled, but too hard for anyone to score. Adrian Beltre become the second hit batter of the game, forcing in a run. The bases were loaded, and Mike Napoli turned in this magnificent at-bat.

It was a beautiful at-bat. Post season baseball is called dramatic, but more often it is just baseball. Teams win in usual fashions, games don't always go down to the wire, the World Series is usually not seven games. This, however, was dramatic for the Rangers' little place in October. It just misses being on the top 10 biggest Win Expectancy boosts in the history of the franchise's playoff games, but for the way Napoli continued to foul off pitches until he got one in to his wheel house, for the fact that Texas went on to win, it probably does and should rank immediately up there among the most memorable things a Ranger has done in the post season.

Texas wasn't done with the weird or the runs yet, though. After Nelson Cruz struck out, Napoli advanced on a wild pitch, David Murphy reached on a strikeout, and ANOTHER wild pitch brought hope Adrian Beltre and advanced Napoli. Napoli completed his trip around the bases on a Mitch Moreland ground out, and James Shields ended his night perhaps even less effective against Texas than he was a year ago. Rangers up 5-3.

In the fifth, Napoli -- who the Angels traded away to pay a man who put forth a .285 wOBA for $18 million because he could not catch -- added to his resume by gunning down B.J. Upton with room to spare on an attempted steal of third, helping Holland leave the inning unscathed. That was Hollands last inning, and though he did not pitch exceptionally well, he pitched well enough for the Rangers to be in a good position with their offense showing up and their bullpen coming in.

The problem was, the bullpen had a snag. In the sixth, Napoli added another hit in an awesome game from the backstop, Cruz finally got his, and Ian Kinsler brought them both home with a double for a four run lead. This wast the part where the win felt assured. Alexi Ogando allowed a double in the sixth, but was fine otherwise. Koji Ueahara came in to the seventh, and unfortunately was not fine. After a lead-off double and a single, his long-time weakness struck -- Evan Longoria, home run. Home runs from Longoria and against Ueahara are nothing new, but he just cannot be allowing baserunners by other means because of his propensity for the long ball. He is a good reliever despite the home runs because he gets outs otherwise. Saturday, he did not, and panic set in with the Rangers only up a run, and the win suddenly in danger.

Fortunately, the rest of the bullpen sat the Rays down. Darren Oliver relieved Ueahara with dominance, and Mike Adams threw a perfect eighth. Mitch Moreland hit a now-sadly-rare home run for insurance, but it was unnecessary in the end. Neftali Feliz had a walk and no strikeouts in the ninth, but the Rays got nothing off of him otherwise, and Texas began their October with a win.

Derek Holland is now just the second pitcher to ever start a home win for the Texas Rangers in the playoffs.

On Sunday morning, Rays fans should still feel better than they did before the series began. Taking a game in the house of the better team is a plus, even if you're only tied. But Rangers fans should now feel far better than they did last night, as they are now firmly the favorites, again, in the series. If Texas just manages one win in Tampa, they are guaranteed at least a shot at C.J. Wilson going for redemption at home to advance. Texas is not only good enough to go 2-1 against the Rays with a home game thrown in there, they are good enough they probably should.

At least not yet. 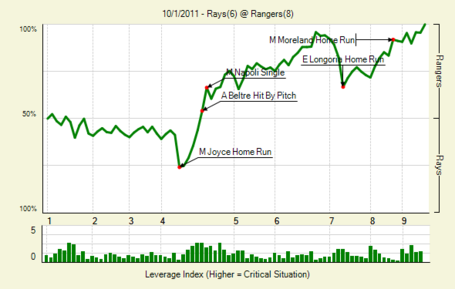