I'm numb. I'm not depressed at the moment, I'm not angry, I'm just numb. That was awful. Questionable umpiring, poor luck on hard hit balls, Alexi Ogando getting hurt, flailing hitters and a rookie deciding tonight was a good time to pitch to his potential.

The Giants had every shot of winning this World Series, but the Rangers have made it look easy for them. Even their one win was close. This whole series, the first in the half-decade history of the franchise, has been a pathetic showing. Coming in to the series, we knew one of the edges the Giants had was a better fourth starter. Tommy Hunter wasn't much worse than we should expect and the bullpen was strong, but (with a little help), Madison Bumgarner showed flashes of his bright, bright future. Hunter wasn't good this year, but it's hard to have a fourth starter who is good. The Giants did, and that's part of why it was important for the Rangers to show up over the first three games. The only put it all together once and Bumgarner and Hunter made them pay.

It's not over yet, obviously. Teams have come down from 3-1, it's not the "only the '04 Red Sox" certainty that 3-0 would have been. But it's pretty close. The Rangers have to sweep the Giants down. And they have to do it with two games on the road. And they have to do it when they've looked putrid so far. Cliff Lee pitches tomorrow, so there's a good chance we at least see a game six, but the Rangers chances are slim now. I'll always be happy about this season, but if this is how it's going to end there will always be a bitter taste in my mouth.

Tomorrow may be the game in the season for the 2010 Texas Rangers, the greatest team this franchise has ever known. I hope it's not, I would probably even bet that it's not, but it might be. It's pretty hard to do right now, but try and find a moment to appreciate baseball while it's being played and think about this season for what it was without thinking about what it could have been.

The big story here, though, isn't the players. Click the jump, because this picture has to be full sized.

This was tonight's strike zone according to Mike Winters. 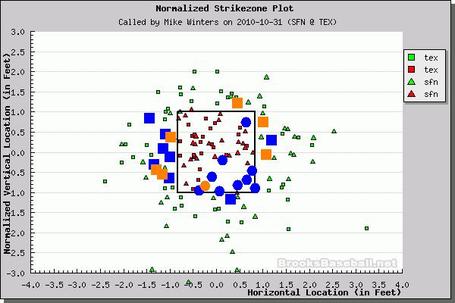 The pitches are labeled by the team that threw them. For ease of use, I've highlighted the calls that were questionable at best. Orange circles are Giants pitches that were called balls, squares were called strikes. The Rangers are the same thing, just blue.

That's as many as nine Rangers pitches that were at least partly in the normalized strike zone called balls, including one that was pretty much right down the middle (that was early). Evening that out a little bit, the Rangers had as many as eight outside pitches called strikes to six for the Giants. The point, however, is not who got more of a benefit from the awful zone -- though that sure does seem to favor the Giants -- but rather the fact that the zone itself was terrible. It started the game tiny and ended the game huge. Pitches called balls would be strikes that same inning. There was no rhyme or reason to Mike Winters' strike zone, meaning on the biggest stage he marginalized the game of talent being played between the two teams and introduced a guessing game. That's not right.

On top of that were two horrible calls at first base. Replay clearly showed Ian Kinsler turned a double play early, and then clearly showed Elvis Andrus beat a double play later. Neither was called correctly, and because baseball has an inexplicable fear of getting calls correct, the Rangers were hurt. The former led to Tommy Hunter throwing a whole lot more pitches than he should have had to and only an amazing catch by Josh Hamilton kept a run from scoring. 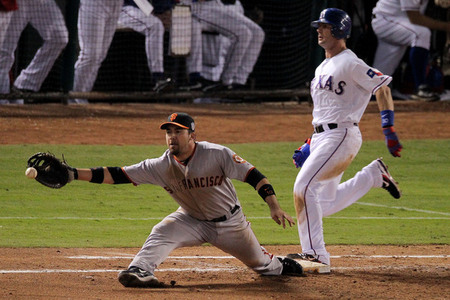 Now, I'm not going to bet that the Rangers would have won with more accurate officiating. What I am going to say is this should never be up for question. We should never be wondering how a game would have ended up had the rules been called correctly. Umpires have a hard job. Telling exactly where a player's foot is on the ground relative to the position of a ball several feet higher at the same moment is rough. Harder still is figuring out where a small, spherical object moving anywhere from about 70-100 miles per hour is in relation to a small, constantly-shifting box with the naked eye. In fact, doing these things reliably is impossible.

Baseball continues to ignore that, though. We'll never be perfect, but baseball doesn't even show an interest in getting things as accurate as possible. They're content to sit on their hands and ignore the fact that umpires are not as good at their jobs as they could be with the aid of technology. I guarantee few fans, if actually presented these situations and the possible solutions, would say the game is more fun with the un-touched human element in umpiring. We watch sports to see the failure and success of the humans playing, not the failure and success of the humans employed just to make sure the rules are enforced.

I don't know what else I can do about this but write about it. So I am writing about it. Share this with your friends. Write about it yourself. Whenever you see bad officiating, spread the word. Every time. It may be a long shot, but this is a problem with baseball that can be fixed, there's no reason to continue to ignore it. The worst thing we can do is continue to accept it. Maybe if we create an uproar, someone important will try and do something.

My biggest fear has always been poor officiating affecting the Rangers in a post-season game. I'm not sure that happened tonight, but it's awful that I'm not sure it didn't. Do something about this, baseball. Then we can cry about just our players failing instead of our players and the umpires failing.