Colby Lewis was a bad man, going deep when the Rangers needed it most and getting six strike outs. He gave up a few fly balls, which he's prone to do, and a couple left the park. Fortunately, no one was on for either. Those were examples of why many people wanted him to start game two. Lewis is a fly ball pitcher and those would not have left the park in San Francisco most likely. He'll be in San Fran for a game seven if it gets that far, though.

The other bad, bad men were rookies. Neftali Feliz came in and dominated, throwing the stuff we all know he's got for his first career post season save with two strikeouts. Mitch Moreland, meanwhile, was huge.  He's had himself a very underrated rookie season (especially when you look at the suggestions he's been a big unlucky on balls in play) and followed it up with a meaningful post season. With two outs and two on, he stayed alive against Jonathan Sanchez who no one but he and Benige Molina seemed to realize couldn't find the strike zone. He sent the ninth pitch deep in to the seats to give the Rangers three runs on one swing. In the end, that home run was the difference. His ability to stay alive and then take it deep -- for the first time in his career against a left hander -- may well go down as the biggest hit in the history of the franchise. In fact, by WPA, it's only one percentage point behind Juan Gonzalez for the No. 2 spot in the playoffs for the Rangers (I'll update that list in a couple days).

There are still concerns. Michael Young, with two double plays, and Vladimir Guerrero, with a mind-boggling caught stealing, continue to frustrate around Josh Hamilton (who checked in with his first home run). I'm wondering why Ron Washington left Jeff Francouer in to face a righty with a man on, instead of going to David Murphy, and then left him on in a two run game in the ninth, rather than putting in Julio Borbon.

This game also favored the Rangers more than any of the first four, most likely, and it was a nail-biter after a couple of blowouts. I should be able to tell myself that's a small sample size and a win is a win, but while I'm happy the Rangers are now a part of the World Series, I'm still scared over what I've seen through the first three games.

Oh well. It's a series now. The Giants are forced to face Cliff Lee one more time, and it's unlikely for him to suck twice. If the offense can just be a little less un-clutch and Tommy Hunter can at least pitch to his mean, the Rangers are probably looking at that Lee start as a shot to put them in firm control of the World Series. That's something that felt a little impossible before tonight, even if I knew it wasn't. 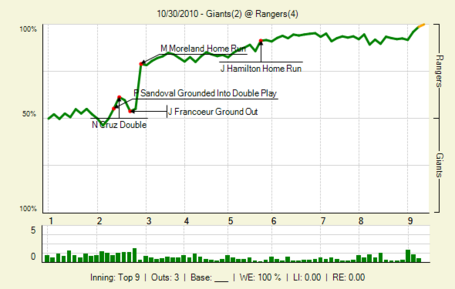