Saturday's game in Lubbock offers an opportunity for both teams to make a statement, both this season and going forward.

If the implications of the Texas Tech Red Raiders vs. Texas Longhorns football game this Saturday weren't big enough, Raider coach Tommy Tuberville decided to up the ante with a new uniform unveiled for the contest. 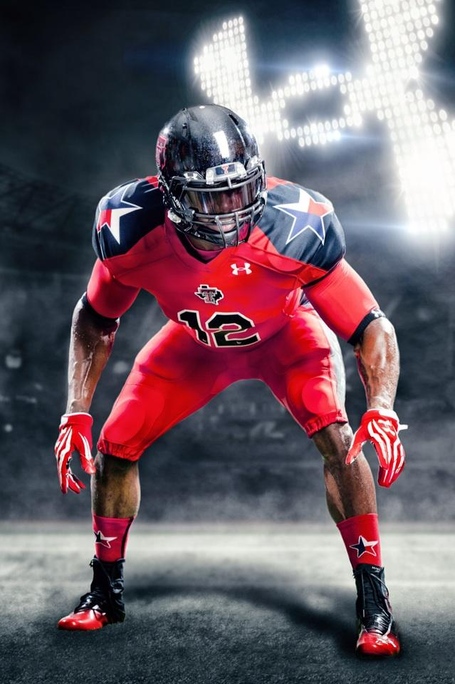 Tuberville is looking to claim the Lonestar and Texas supremacy over Mack Brown's Texas Longhorns, and they'll be doing it in Lubbock.

Ignoring the aesthetically unappealing combination of the traditional helmet with the red and blue uniform, it seems clear that Tuberville and the Red Raiders want this to be a statement game. With victories over TCU, Baylor, and Texas, Tuberville has a recruiting pitch to try and bring in the kind of athletes that will finally elevate Tech's defense closer to the level of the SEC teams he's coached in the past.

In Austin, Mack Brown is clinging to a 6-2 record that includes the 63-21 brutalization inflicted by Oklahoma and another warning sign in Kansas, where Texas barely escaped with a 21-17 victory. This victory only came at the last second due to some Case McCoy magic, which Texas fans have learned is sporadic and unreliable.

David Ash is the easy call to be QB on Saturday, but the Kansas game only reemphasized that he is not yet a Vince Young or Colt McCoy who can carry and elevate a team. The Texas offense struggled until they hit Goodwin and DJ Monroe on outside sweeps that nearly broke Kansas' defensive back and revitalized the Texas offense.

Against Texas Tech, there are matchup opportunities for Texas to sneak away with another road victory but the Longhorn defense will have to hold up their end of the deal.

On offense, Texas faces a very solid defensive tackle tandem in Delvon Simmons and Kerry Hyder, who have combined for 13.5 tackles for loss on the year. Behind them is an average corp of linebackers and a safety in Cody Davis who provides excellent run support due to his open field tackling. Their pass defense has been solid save for against Kansas State where the running game required too much attention to also stop Klein's growing passing attack.

Unfortunately for the Red Raiders, their defensive end play has not been stellar this year and setting the edge is the easiest way to squelch the Texas offense. Other squads have ruined the Texas attack plan by taking away the perimeter with blitzes or aggressive play from the ends or outside linebackers and funneling the ball inside, where Texas' OL has lacked the brute strength to impose their will.

Tech will have to sacrifice numbers from somewhere else in their defense to execute this strategy but until Texas makes them pay it's a good bet. The interior triangle of the Raider defensive tackles and middle linebacker Will Smith are strong enough to withstand Texas inside running game without schematic assistance.

On the other side of the ball, the Texas defense has a favorable matchup in the Tech offense which is missing their star TE and frequently plays four WR's on the field. The Longhorns defense is at it's best, and even strong, when playing with dime personnel in obvious passing situations. They are at their worst when trying to play run defense against a team with a lead blocker and vertical threats.

Tech's running game has been pretty mediocre and their offense relies mostly on screens, hitch routes, and other easy throws that require discipline and physical tackling to stop, and then big plays over the top with vertical throws to receivers like Darrin Moore and Eric Ward.

However, because the Tech passing game will certainly require the attention of the Texas defensive backfield, there could be opportunities for their running game as well. The key for Tech is inviting nickel personnel, rather than dime, from Texas and then attacking the linebackers. Without Jace Amaro, their tight end, that becomes a complicated plan. Yet, the Texas defense has been remarkably vulnerable to good offenses.

All in all the matchups favor Texas. They are well suited to get the pass rush and tight coverage that can kill an Air Raid attack while Tech is poorly suited to get a running game going that would spoil the victory formula for Texas.

However, this game will take place in front of 60k crazed Tech fans at Jones AT&T Stadium in a signature game for the Red Raiders. Traditionally, this environment has been a difficult nut to crack for the Longhorns and Mack Brown is only 4-3 on the road against Tech.

Texas badly needs a win for the respectability and momentum of the program trying to wash off the stink of the Red River debacle and prove after a lackluster effort in Kansas that this team is fully bought into the coaching. But they'll need to find victory against a fired-up Tech team playing in front of a crowd that is certain to be raucous.

If the Longhorns are still growing and improving as a football team, they'll take this opportunity to establish the league hierarchy against the perpetual upstart Tech and build the case for the continuation of Mack's regime. However, if the Kansas game is a sign that this Texas team lacks the identity and motivation to put forth a strong effort away from home then the Red Raiders will quickly wave away the various schematic problems and pour on the points with their trademark explosive offense.

If that happens, and Tech is allowed to claim the Lonestar on their sleeves while beating down an underachieving Mack Brown team then the Longhorn logo is going to require revitalization this offseason, starting at the top. Otherwise Mack Brown will risk losing his reputation in state and unimpeded access to the star recruits that have propelled his teams.

With a win Texas Tech is looking to fill the power vacuum left by Texas' decline whereas Texas has a chance to make their own statement and reclaim a season that could get out of hand with a third loss and potentially more to come.