In the past week SMU has beaten cross-town rival TCU, infuriated their coach, rode the realignment rumor carousel (Big East? SEC? Really?) and might have even picked up former Texas quarterback Garrett Gilbert. Maybe it's all that viral marketing - As ESPN Gameday broadcasts from the Cotton Bowl in anticipation of the Red River Shootout, see if you can count the number of SMU-related signs in the background: 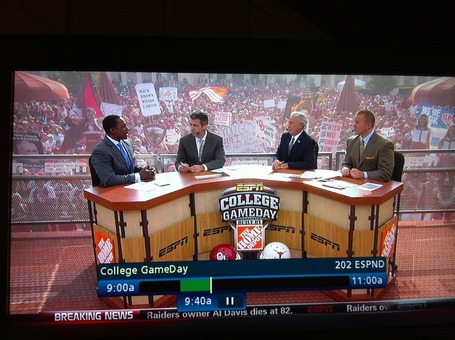 This isn't the first time the Mustangs have crashed Gameday this season. As SMU2BCS chronicled in week one, witty pro-Mustang signage invaded the site of the LSU/Oregon Cowboys Classic.

Memo to Highland Park: The BCS conferences won't simply be impressed with your patronage, Mustangs. Wit, a lack of tact and an aim to infuriate separate the great fans from everyone else. Case in point? The stunning lack of Gary Patterson troll signs is a huge black mark on your conference realignment aspirations.