Cam Newton wore a stylish sweater to his press conference

Cam Newton is down after the Panthers' latest loss, but at least he looks good.

Share All sharing options for: Cam Newton wore a stylish sweater to his press conference

Carolina Panthers quarterback Cam Newton was disgruntled, frustrated and every other adjective to describe someone whose team just lost to the Dallas Cowboys after Sunday's game. Of course, nobody really noticed any of that, with Newton's snazzy sweater hogging all of the attention. 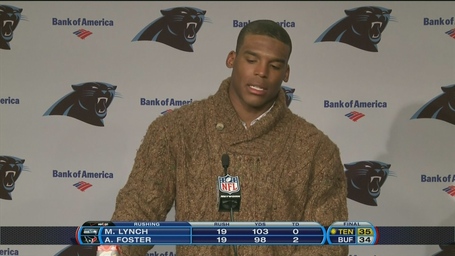 Newton threw for 233 yards and ran for another 64 in the Panthers' fourth consecutive loss. He doesn't know what the problem is.

By "that," he certainly can't be talking about the sweater, which appears to be made out of some of the finest wool that the world has to offer. Personally, I don't see why he's so cranky. Sure, his football team lost (again), but how can your mood be so bad when you look so good?

Cam, his sweater and the Panthers face consecutive road games in tough environments, traveling to Chicago next week before heading to Washington on Nov. 4. Carolina may not get that elusive "W" anytime soon, but at least Newton will stay warm in a couple of cold-weather cities.