During a 56-53 triple-overtime thriller, Red Raiders fans took a jab at the troubled TCU quarterback.

After his arrest on Oct. 4 on charges of driving while intoxicated, quarterback Casey Pachall was suspended from the TCU Horned Frogs football program indefinitely. Five days later, the school announced that Pachall would leave the university to enroll in a inpatient rehab facility for substance abuse treatment.

In his place, TCU has had to turn to redshirt freshman Trevone Boykin, including Saturday's game against the Texas Tech Red Raiders. While it was Boykin that led the Horned Frogs to a third-overtime loss with four touchdown passes and 332 yards through the air, the Texas Tech fans couldn't resist the opportunity to take a jab at Pachall. 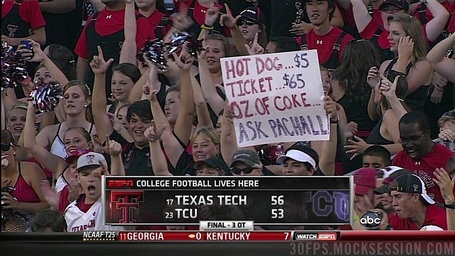 Hmm...for some reason, I get the feeling that the "OZ. OF COKE" isn't talking about a single ounce Coca-Cola. Maybe there's some sort of substance that is commonly referred to as "coke" that somehow relates to Pachall's need to enter into a rehab facility.