NBA Finals, Heat Vs Mavericks: Game 2 Thoughts, As Dallas Wins On The Boards And The Bench

Share All sharing options for: NBA Finals, Heat Vs Mavericks: Game 2 Thoughts, As Dallas Wins On The Boards And The Bench

Game 2 of the NBA Finals featured an amazing performance by the Dallas Mavericks, who showed the resolve and determination they've shown throughout the playoffs on the way to a 95-93 win over the Miami Heat on Thursday night. The Mavericks victory evened the best-of-seven series at 1-1 as it heads to Dallas for Games 3, 4 and 5.

Dallas won despite gifting the Heat 31 points off of turnovers, having Dwyane Wade go off for 36 points and having Bibby rediscover the fountain of youth for 14 points. So how did they do it?

After he struggled with his shot in Game 1, the Miami Heat  looked to get Wade involved early and often in the first half of Game 2. In the first six minutes of the game, Wade was 4-for-6 for eight points and had three assists. He finished the half with 21 points on 9/13, two steals and two blocks. Mike Bibby started the game 2/2 from three and Deshawn Stevenson was able to keep the Mavericks within range with a pair of his own. Peja Stojakovic played five minutes in the first quarter and showed no signs of snapping out of his funk. Peja did not put up one shot but committed a turnover and looked lost on both ends of the floor. J.J Barea checked into the game at the end of the first quarter and immediately attacked the rim, hitting his first layup. Barea continued to play well in the first half, penetrating and creating shots for the Mavericks. The Mavericks had quietly extended their lead to 40-34 when a couple of Wade dunks closed the gap to 40-38. A missed opportunity came a few minutes later when Lebron James picked up his third foul with under four minutes to go in the second quarter. The Mavericks held a 52-41 advantage with a chance to maintain or extend their lead.  One thing the Mavericks didn't want to do was get the Heat in the penalty. Inexplicably, the Mavericks fouled the Heat on four straight possessions and a Wade three to end the half had both teams tied going into the break at 51. The Heat ended the half on a 9-0 run.

Turnovers and dunks helped the Heat extend their run to 15-1 and a 57-52 lead. They would lead by 10 a few moments later 71-61. Brian Cardinal got some run with 4:23 left in the third quarter in response to Stojakovic's lackluster play. He soaked up a couple of  minutes and then Nowitzki checked back in. The Mavericks were able to string a few offensive possessions to end the quarter and a Terry basket with four seconds left cut the lead to 75-71 going into the fourth quarter.

The fourth quarter got off to an ominous start as Haywood picked up a strained right hip flexor a minute into the quarter and was done for the game. With the Mavericks needing a spark on offense Rick Carlisle put in an ultra small lineup with no Chandler. The result? A 13-0 run by the Miami Heat. The lead was 88-73 and the Mavericks were all but done. Carlisle inserted Chandler back into the game and good things began to happen. How good? The Mavericks went on a 17-2 run to tie the game at 90. Dirk scored the Mavericks' final nine points including the game winning layup with 3.6 seconds to go. Left handed. The Mavericks had completed another historic comeback and the Heat were left stunned. 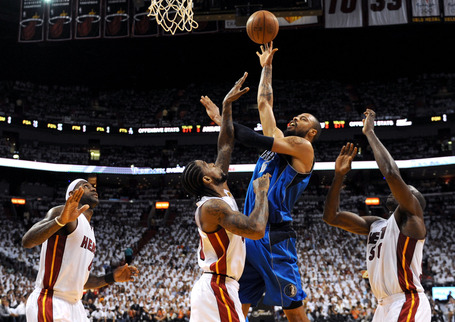 The keys coming into the game were the battle of the boards and the benches. The Mavericks won both. They out-rebounded the Heat 41-30 and the bench scored 23 points to the Heat's 11. A definite improvement on the boards but the bench could give them much more. Terry finished with 16 points but was only 5/11 from the field, Barea was 2/7 from the field and Peja was nowhere to be found. If their bench is able to get on track, the Heat could be in trouble. After a subpar game one, Chandler responded well in game two. He finished with 13 points and seven rebounds but was much more active keeping balls alive and really got under the Heat's skin throughout the game. He also played a key role in getting Nowitzki open on the late three that put them up 93-90 by setting a viscous screen on Udonis Haslem.

Dirk showed no ill-effects of the torn tendon on his left hand and finished with 24 points and 11 big rebounds. And I'd be remiss if I didn't mention the performance of Shawn Marion. He was immense down the stretch in denying James and Wade which forced them into contested threes and finished the game with 20 points and eight rebounds.This game is not won without Marion.

Of course, the Mavericks could not mount this comeback without some help from the Miami Heat. The Heat attempted 30 three pointers and were only able to convert nine. The shots that were falling in game one for Wade and James did not fall in game two as they each went 2/7 from behind the arc. The ball movement became non-existent and they began to hoist threes as their lead began to dwindle. They thought they had this game won with seven minutes to go and became complacent at 88-73. The Mavericks took advantage of it, began to hit the open shots they were missing all series and simply stole a game in Miami.

While this may have shellshocked some other teams, I expect the Heat to come out firing in game three but the goal coming in for the Mavericks was to gain a split. It didn't matter how, just get a split. Turns out, it took comeback for the ages. But, hey, they're coming back to Dallas with a split.