DeShawn Stevenson is known for being a rather vocal player when it comes to the court, but after the newly-crowned Mavericks landed back in Dallas after Sunday night's victory over the Miami Heat, the forward let his t-shirt do his talking.

Stevenson has had a long-standing rivalry with LeBron James, dating back to Stevenson's time with the Washington Wizards when rapper Soulja Boy was as popular as a rapper named Soulja Boy is going to get, but Stevenson said the feud was finished prior to the start of the NBA Finals.

"I don't think he forgot," Stevenson told ESPN last month. "It's still there, but it was with my old team. I think it's pretty much over. It's a different team, different type of situation. But sometimes people don't forget things."

Stevenson is one of those people that don't forget things, apparently, as he wore the following shirt on Monday. 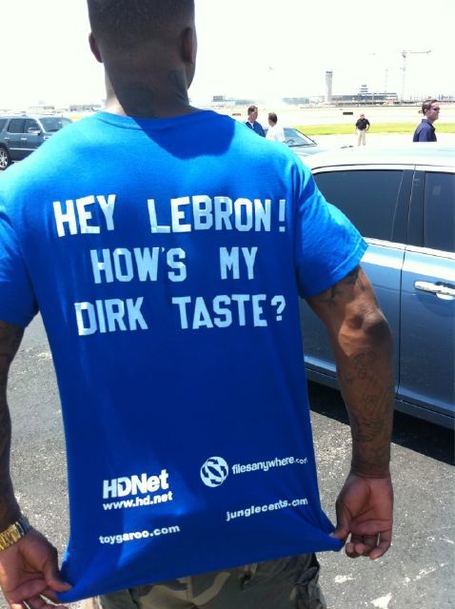 The phrase is, for those unfamiliar, a play on the famous Shaquille O'Neal rap diss featuring former teammate Kobe Bryant.