The Dallas Mavericks' emphatic sweep of the two-time defending champion Los Angeles Lakers in the 2011 NBA playoffs sent them to their first Western Conference Finals since 2006, where they advanced to the NBA Finals for the first time. As you might expect, the Mavericks' ascension to prominence means fans will have to pay even more for tickets to the Conference Finals, where they'll face the Oklahoma City Thunder.

How much more? Try 302 percent, according to SB Nation partner TiqIQ. 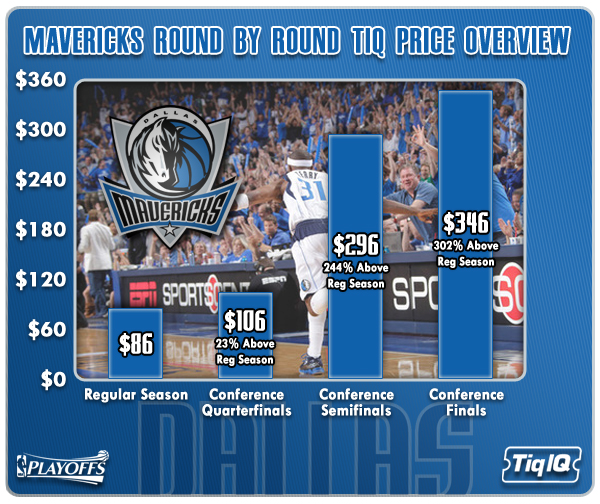 Indeed, the average cost of a ticket to see the Mavericks in the Western Conference Finals stands at $346, a 302 percent increase over the average regular-season cost of $86.

While that price indeed seems extravagant, TiqIQ also tells us that Dallas has the cheapest average ticket of any of the four NBA teams still alive. Even tickets to see the small-market Thunder cost more ($382, on average) than tickets to see the Mavs.

Game 1 between OKC and Dallas tips Tuesday night at 8 PM. ESPN will carry the game nationally. Please visit Mavs Moneyball for complete Mavericks coverage, as well as to get NBA playoff tickets via TiqIQ