ESPN Magazine, for their NBA preview edition, has created a Marvel Comics cover for each NBA team. John Wall is the Human Torch, Carloz Boozer is The (Red) Hulk, Dwight Howard is Wolverine, and Kobe Bryant is Iron Man

Ant-Man is one of Marvel's resident eggheads, a brilliant scientist who's always tinkering - consequences be damned. Sound familiar? Mark Cuban has a solid squad, but last season the Mavs had its worst efficiency rating since 2000-01.

Click on the image after the jump for a larger verson.

Jason Kidd, Dirk Nowitzki and Caron Butler are three of the experiments, but to be honest I can't tell who the fourth is. The caption also notes that the Mavs are likely to be one of only two teams (the Lakers are the other) whose starters will all be over 30 years old. They're obviously discounting the Roddy Beaubois factor in both regards. 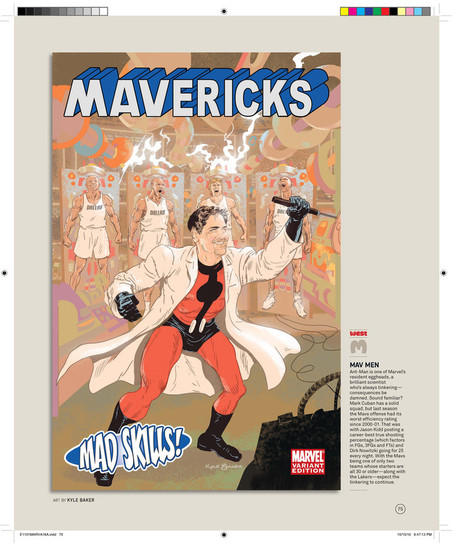