Share All sharing options for: Jerry Jones Is Rapping Now

Despite the promise of ridicule and of sure failure, and bereft of anyone who can write good lyrics or produce a solid beat, celebrities and companies continue to walk the path of rap promotions. Sometimes, companies call on celebrities to combine their rap inabilities to create an especially awful rap.

Such is the case with Jerry Jones, the Dallas Cowboys owner, who is now "spitting" for Papa Johns pizza. It goes as well as you would imagine.

It's clear that one marketing philosophy lives on: if you need it to be cool, when in doubt, make a rap.

There's a moment at the beginning when you get sucked in, oh-so-briefly believing that Jerry Jones is about to deliver: 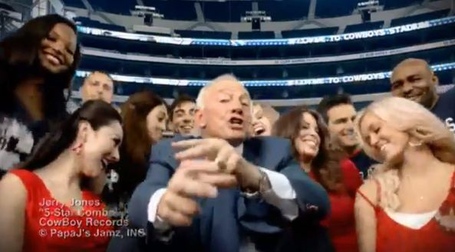 The gold watch, the big ring ... if the next scene was in a hot tub, I might have believed it. Instead, we are given the sure-to-be-legendary lyric, "Yo it lights me up like a Roman candle, with toppings and flavor almost too good to handle."

The video devolves from there, as Jones busts out stereotypical moves like the finger flick and the strut-to-the-beat, while a delivery man breaks out the "robot."

Please make sure to put the mic back on the stand when you leave, Mr. Jones.

For good football videos, make sure to check out SB Nation's YouTube channel: