Nick Foles is from Texas, had a football in his baby picture

The Eagles quarterback received an early exposure to the sport of football.

Share All sharing options for: Nick Foles is from Texas, had a football in his baby picture

If there is one stereotype about Texas that rings true, it's that the sport of football rules all when it comes to High School sports. Friday Night Lights was a longtime show built around the intensity and sacrifice that comes with high school football in the heart of Texas.

For many budding stars in the state a love of football was instilled a very young age. None younger, perhaps, than Nick Foles, shown by this dastardly cute photo of the rookie quarterback holding a football at just one day old surfaced on Sunday Night Football. 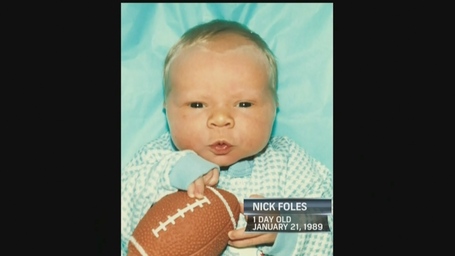 The Philadelphia Eagles quarterback grew up in Austin, Texas and starred at Westlake High School, breaking school records previously held by Drew Brees. Apparently not drawing much interest from Texas schools, Foles eventually landed at Arizona where he led the Pac-12 in passing in 2011.

Foles was eventually drafted by the Eagles in the third round in the 2012 draft, with the native Texan taking over for Michael Vick in a game against the Dallas Cowboys on Nov. 11.

Cowboys vs. Eagles: A dramatic win