Tony Romo and the Dallas Cowboys fell to 3-5 on the season on Sunday night, after losing to the Atlanta Falcons, 19-13.

The Cowboys seemed to be ready to strike from the start in the first quarter, after Matt Bosher returned the Falcons' first punt 37 yards to set Dallas up early. But the Cowboys were unable to finish the drive with a touchdown, instead settling for a 23-yard field goal from Dan Bailey, which would set the tone for the first three quarters of the game.

The two teams would trade field goals the rest of the first half, as Bailey would connect again near the end of the first quarter from 32 yards out. The explosive Falcons offense was held without points until Matt Bryant got Atlanta on the board with two long-distance field goals, from 45 and 46 yards out to knot the score at the half.

Finally, in the fourth quarter, the Falcons capped a 6-play, 81-yard drive with the Turner touchdown, set up by a 43-yard rush near the end of the third quarter that allowed the Falcons to break through and reach the endzone. Turner would end the night with 102 yards and that score.

After adding another Bryant field goal, the Falcons defense seemed to let up against the Cowboys, as Tony Romo connected with Kevin Ogletree on a 21-yard strike to bring the score to 16-13 with just more than five minutes remaining in the fourth. Ogletree ended the night with 96 yards, receiving while Romo collected 321 yards and the one touchdown.

The Falcons were able to just run out most of the clock from there, as two Jacquizz Rodgers catch-and-runs and a defensive penalty on the Cowboys helped Atlanta kill the clock and set up Bryant for a fourth field goal.

The Cowboys regained possession with 17 seconds and zero timeouts remaining, and their desperation drive was stopped well short of the touchdown they needed. 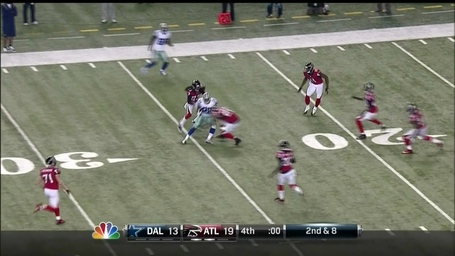 Matt Ryan ended the night with 342 yards, with Julio Jones and Rody White each collecting more than 100 yards.

Beyond Bailey and Bryant's early kicking successes, more traditional fantasy players like Ryan and Romo had somewhat muted nights. Romo finished with 321 yards, targeting receiver Kevin Ogletree for 96 yards and a touchdown. Ryan finished with more than 300 yards, but did not throw a touchdown.

The Falcons' real stars were the receivers, as Julio Jones (129 yards) and Roddy White (118 yards) hauled in plenty of yards and points.

Turner's rushing touchdown gave the back a nice fantasy night, as the running back collected more than 100 yards on the ground and scored.

The Falcons were favored by four points at home, and just covered with their late field goal.

The Cowboys take on the Philadelphia Eagles in Week 10, while the Falcons will put their perfect record to the test against the New Orleans Saints.