How close was Dez Bryant to coming down in bounds?

The Cowboys came *THIS* close to mounting an unbelievable comeback in a game that's a perfect metaphor for Tony Romo's time in Dallas.

Share All sharing options for: How close was Dez Bryant to coming down in bounds?

By all accounts, the Cowboys 29-24 loss to the Giants should never have come down to the last few seconds.

Dallas had an astounding six turnovers in the game -- some of which were fluky, many of which (Felix Jones fumble while trying to secure the ball on a routine hand-off, Dez Bryant's awful job of fielding a punt in the first half) were just careless.

Yet, somehow, despite how poorly he had played for most of the game, Tony Romo managed to put the Cowboys in position to win.

With 10 seconds left, Dez broke free behind the Giants secondary, Romo dropped the ball between two closing New York defenders and Dez made an unbelievable falling catch that was initially ruled a TD.

However, on replay, it became obvious that it just wasn't meant to be: 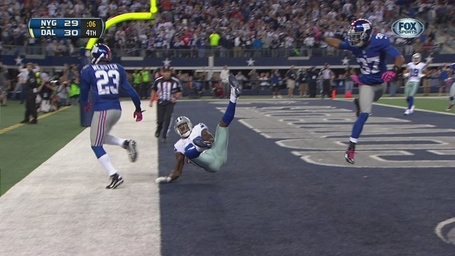 That, more than anything else, may sum up the Romo era in Dallas. It just wasn't meant to be.