The current edition of ESPN The Magazine is the style issue, and one of its features is fashion designer Tommy Hilfiger's concept for a redesign for a new Cowboys jersey (as well as the Lakers, Yankees and Canadiens, which you can see here).

Says Hilfiger in the sports publication: "If you think about America, the symbol that pulls us together as a country is the flag. Compared to the original Cowboys' uniform design, we love the repetitive feel of the small stars representing a different state that each of the players may come from."

He tells the magazine that the stars "represent the team as a whole, while the helmet represents the player as an individual." And he went with the idea of "making each player a star and enlarging it to include his number." That way, he says, all the players are "easily identifiable on camera, even when they're piled up on the field searching for a fumbled ball!"

See the design after the jump. 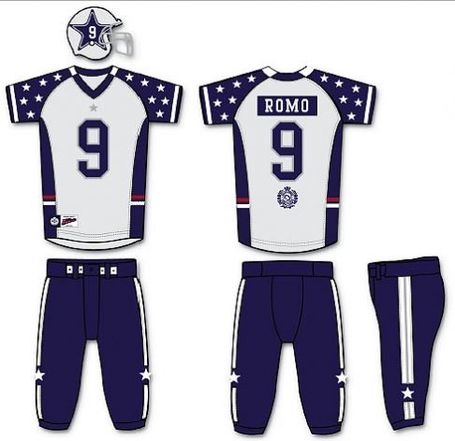