Robert Griffin III joined Twitter seemingly just to cheer on the Baylor Lady Bears in their two Final Four contests, and then magically found himself courtside and IN THE TEAM PHOTO, ADORABLY OF COURSE, as Brittney Griner and company celebrated their perfect season Tuesday night in Denver: 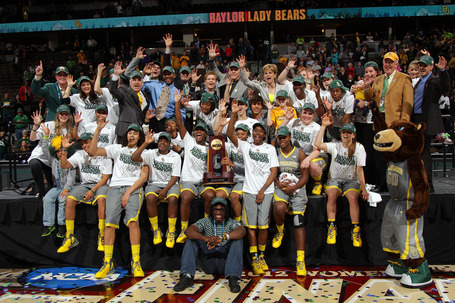 The fancy-socked one also gave a nice summation of the year in sports around Waco, Texas, making a strong point that things have never been better for the Bears:

Remember when this school was on the verge of being thrust out of a major conference during rapid realignment? That was last year. Suddenly, everything's coming up Ken Starr.

For more on the Baylor Bears and the womens national title, be sure to check out Our Daily Bears. For news on RG3, check out SB Nation's NFL page and Mocking The Draft.