The Rangers lose on a what will probably be called a heart-breaking walk-off, but the focus should be on a brilliant pitching performance.

The stingray petting tank in Tropicana Field is actually kind of nifty to sit next to. There's something unusually interesting about sitting next to a large aquarium of funny looking fish while actual Major League Baseball is happening in front of you.

What is bizarre is the steady stream of fans hanging around the tank to pet the stingrays despite the fact that there is actual Major League Baseball happening, even if a thrilling game is happening.

You know, like a pitcher's duel that is knotted up almost the entire way. Like what happened on Friday night.

Unfortunately for a visiting Rangers fan, the rays shut down following the 7th inning stretch (the fish, not the millionaires), meaning all those people are in their seats to make noise. While 19,545 announced attendance is not a lot of people -- even for Tampa Bay -- they can get shockingly loud when contained in a giant warehouse, and very unpleasant when you're their enemy.

Even more so when nothing shuts them up in the end.

Yet it should be hard to be overly upset about game 138. Through regulation, the Texas Rangers out-hit a playoff-caliber opponent on the road, and simply failed to pull out the victory because that's the way baseball go. With the division most likely out of reach, good control of home field advantage, and not a lot of reason to believe Texas can't play with teams like the Rays, this game just did not mean much.

In the mean time, Derek Holland turned in a gem worth salivating over. Through eight innings pitched, Holland allowed just four baserunners -- two on walks -- against eleven strikeouts, making a strong bid for a return to the October rotation.

"I know some numbers may say they don't think I have," Holland said afterwards, "I felt like I turned a corner a while ago."

ERA is a number that may have said he hasn't, but something like FIP -- where his 3.98 posting in August was his lowest rate since May -- certainly agrees with Holland, and he only continued to justify the statement against Tampa Bay. Holland's fastball in 2012 had been averaging just over 88 miles per hour; Friday night, it averaged over 93, and approached 96. That fastball garnered a dominating 11 swinging strikes on the evening (one more came on the slider). These are not just examples of the Rays having one of those days where they decide to get no-hit or something, this was a legitimate showing of incredible stuff and control from Holland.

Unfortunately, there was just one mistake from him.

Evan Longoria came in to tonight with a career 1.543 OPS against Holland. When asked about their history, Dutch said he is, "pretty well aware, and I'm sure [Longoria] is, too." The first meeting resulted in a strikeout, and Holland said he felt inside fastball he gave Longoria on a 1-3 count was a good pitch, but Longoria is an incredible hitter. Holland's good pitch was Longoria's home run.

Annoyingly, one little mistake is enough in a nail-biter. Michael Young tied things back up with a home run as he continues to look like he remembers how to hit again, but Texas never could get to the Tampa bullpen. Ben Zobrist got to Mark Lowe with an 11th-inning walk-off, the fans who hadn't left went ballistic, and the Rangers find themselves down in the weekend series.

These are all facts, while the emotion probably shouldn't be anything too downbeat. In the grand scheme of things, this was an insignificant game, and it should be pretty easy to ignore the loss and focus on the brilliant pitching.

If Texas ends up at 99 wins, we can all hate Evan Longoria or something. 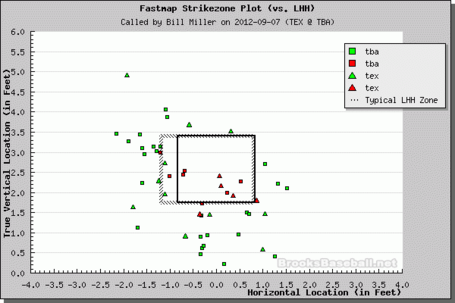 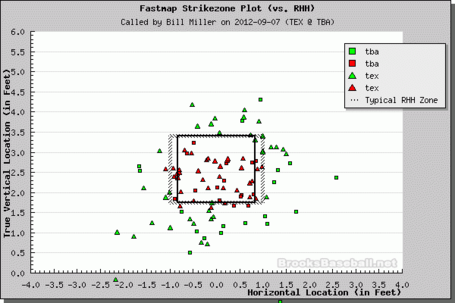