Despite a strong effort from Yu Darvish, the Texas offense couldn't get anything going against Blue Jays starter J.A. Happ.

Share All sharing options for: Rangers Hapless Against Happ

It's likely many will look at the L next to Yu Darvish after this game and continue to bemoan the rookie's recent performance, but anyone who looks at any other part of his performance will be plenty excited.

There were struggles initially, with a walk to Kelly Johnson followed by an Edwin Encarnacion home run, delivering the first two runs of what ended up a low scoring contest. Unfortunately, walks are Darvish's infuriating problem, and the home run came on a center-square slider that might as well have been on a tee, and those two runs were the difference between winning and losing, but it is hard to fault Darvish for the loss.

From the moment of that awful pitch onward, Darvish only allowed one more free pass -- on a hit by pitch -- while notching 10 strikeouts in seven innings of work. For the game he still managed just over two thirds of his pitches for strikes, but there was enough movement for a staggering 18 swinging strikes. You can live with a little bit of inaccuracy when you can pull off that much tom foolery. That worked because he found the strikezone just over 70% of the time with his fastball, and managed eight of his swinging strikes on a pitch that he hasn't always been able to establish this season. When the Blue Jays actually did connect, it was mostly hit on the ground. Another run scored thanks to the only other hard-hit ball of the day -- a triple in the fifth -- but that was it.

Darvish was not completely un-hittable, but he was dominant and fun to watch. His season has been disappointing lately, but almost every day that he shows what he did Friday night will be a good day.

The problem was the Rangers making J.A. Happ and the Toronto bullpen look like Good Darvish. Happ had eight strikeouts in six innings, pretty much just by throwing low-90s fastballs. After his departure, they managed just two more hits in the final three frames for a pathetic offensive output.

Despite the lack of baserunners, they still managed some opportunities. In the fifth inning, Texas put runners on first and second with no outs, a run expectancy of just over one-and-a-half. Ron Washington elected to bunt with Geovany Soto, which is a silly plan even when you're Geovany Soto because the run expectancy actually goes down. A run did score, but that was it.

Another shot with expectations of more than a run came with runners at the corners and one out in the seventh. Again, Geovany Soto could do nothing, again they managed a run, but again nothing more. Then before an Adrian Beltre single, Josh Hamilton stood around just a bit too long on a dropped third strike in the eighth.

Chances to tie or maybe even win the game squandered, but chances only thanks to Darvish. Even if they squeezed out the likely runs, the Rangers were still completely pathetic at the plate. Or maybe Happ was just that great at locating his fastball, the result is still frustrating.

It is getting hard to care too much about games like this with the division not particularly close at all any more, but homefield advantage in the playoffs would be pretty nice.

Biggest Play: Edwin Encarnacion homers, driving in two runs in the first inning, proving to be the difference in the end (16% Win Probability Added). 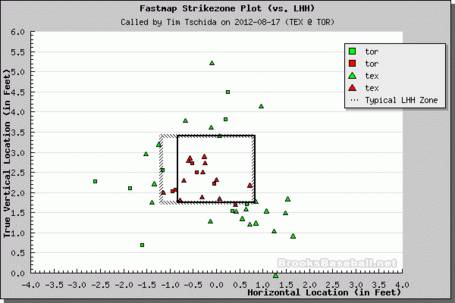 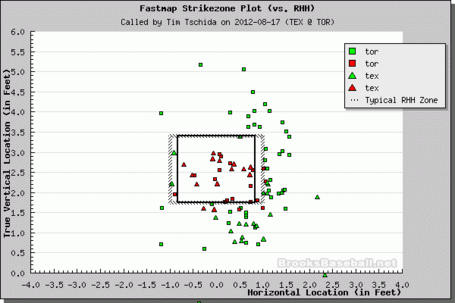