The Hot Stove League has barely begun, and the Rangers are already filling at least one of their two open rotation spots with an exciting young All-Star.

Lost somewhat in the horror show that was the end of the Texas Rangers' 2012 collapse was the amazing pitching coming out of the rotation all season. At least by their own historical standards.

With 847 strikeouts, the 2012 Ranger rotation set the highest total since the franchise moved to Arlington, 47 more than the previous high set in 1973, and most of the major contributors to that total will be returning.

Yu Darvish immediately became one of the best pitchers in baseball. Matt Harrison came of age and turned in a season most teams would kill to have as their No. 2. Derek Holland struggled with injury and inconsistency, but has already been a true mid-rotation asset in the Majors. All three are young enough that improvement should be no surprise, making for another rotation that should probably rank among the best in the history of the franchise.

That fills three spots. Colby Lewis offers the promise of another strong starter who belongs higher than the back of a rotation, but will not be available until late in the season after Tommy John surgery. Neftali Feliz's bout as a starter was probably a bit underrated, but after also having Tommy John, he will also miss most or all of 2013, and may just be stuck back in the bullpen if he comes back. Scott Feldman, Roy Oswalt, and Ryan Dempster are gone.

The Rangers could -- and I argue should -- look to free agency to fill at least one of those spots. Most notably is Zach Greinke, who over the past four years ranks behind only Justin Verlander, Cliff Lee, Roy Halladay, and Felix Hernandez in terms of FanGraphs' Wins Above Replacement. He just turned 29, and without a lot of great first basemen or outfielders out there for Texas to spend money on, represents a great way for them to improve and throw around some money. That will depend on the market, but if Texas is not competitive in the Greinke sweepstakes, that will be cause for some sadness.

Outside of that, the best options are probably internal. Should the Rangers fail to land Greinke, or pull someone from elsewhere, the fifth spot will probably mean the full-time arrival of Martin Perez, who had a solid -- but short -- debut in the Majors last fall. The next spot would probably go to a guy who's already been to an All-Star Game as a starter. That's not a "maybe" kind of thing, either, because it looks like Alexi Ogando is headed back to the rotation.

In 2011, the Rangers decided to try Ogando out in the rotation, and the choice looked to be a revelation. Over his 29 starts, he struck out nearly a fifth of batters faced, while walking under 7%. He managed to keep his home runs down despite being in Arlington, and all this while facing more left handed hitters than the typical right handed starter has to deal with. The end result was a 3.51 ERA, a still-very-good 3.65 FIP -- in Arlington -- for a 3.7 WAR season (3.2 at Baseball-Reference).

It's not very often someone turns in an All-Star-caliber season in the rotation at age 27 and goes back to the bullpen, but Ogando didn't even see the post-season as a starter. The reasoning was largely because the Rangers had a strong rotation and someone had to sit, so they went with the man who had not had a full year as a starter.

This was backed up some by Ogando having a pretty pedestrian August, which sort of beget this meme that he was tiring towards the end of the year. That carried over in to 2012, with some fans saying he just didn't have the stuff to be a starter. Which is weird, since he was a darn good starter for a whole season. It is also weird, because he was perfectly fine in September for someone who was tiring. Ogando's 2.36 FIP in September was, in fact, the best month of his season. It was the highest ground ball rate by month, and second best walk rate. That is from a small sample due to his move to the bullpen, but it was an excellent small sample.

Also for a man who was tiring, his fastball sure didn't show it. 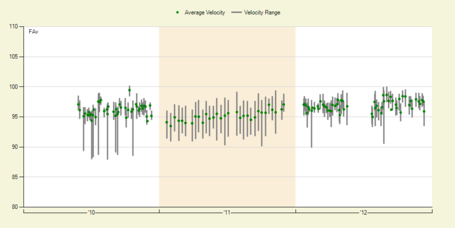 The middle of this chart is 2011, and it shows Ogando's velocity steady increasing over the course of the season. He was hitting the mid 90s with regularity in the late months, despite logging 169 innings. It also remained effective. In August and September, Ogando threw his electric pitch for a strike just about as often (actually higher) as he did in May and June. Yet, despite supposed fatigue, it resulted in a swinging strike 8.2% of the time in those late months, as opposed to 5.8% in the earlier months. You will also see similar effectiveness from the two samples in his slider.

So, if Ogando was tiring, it sure did not show in his pitches. So what was the problem then? Home runs. In August, Ogando gave up more than one-and-a-half home runs every nine innings, with April being the only month he even approached -- let alone surpassed -- more than one. He also had a not-so-wonderful .375 batting average on balls in play. As we should know, though, home run rates against pitchers can vary greatly over even months worth of sample, let alone just one month. Ogando may have been legitimately struggling, but given the entire season and the month after, it looks like August's bout with long balls was a blip on the radar.

All this comes together to make the following argument: Alexi Ogando is still a very, very strong prospect as a starting pitcher. Putting him in the rotation gives the Rangers a man who has very recently had as strong year as a starter, and one who is still in his prime years. The ZiPS projection system assumed he would start, and say 150 innings of a 3.72 ERA pitcher. It weakens the bullpen, but the rotation is absolutely more important.

Without Colby Lewis, and with no excitement of finally giving Neftali Feliz his chance, it is very nice to know there is still an exciting option to plug in to the 2013 rotation. If you are remembering that August that one time when the league caught up to him only having a fastball, or where he tired out over a long season and couldn't cut it as a starter, you are probably worrying to much at best, if not remembering entirely incorrectly.