Mavericks Vs. Clippers Reaction: Something Too Familiar In L.A. Loss

Share All sharing options for: Mavericks Vs. Clippers Reaction: Something Too Familiar In L.A. Loss

SB Nation's Dallas Mavericks blog Mavs Moneyball has a comprehensive look at last night's heartbreaker loss for the Mavericks in L.A., the second game at the Staples Center in which Dallas was beaten with a last minute shot. Jason Kidd's quote sums up the last second bad luck nicely:

(On the Mavs) "We must lead the league in last-second shots made by our opponents, so we've got to figure out a way to close the door. We left it open, but there were a lot of plays that led to that just to get us back in the ballgame. And those two shots Jason Terry made were huge."

Among the post game quotes and video, the Moneyball bloggers do a nice job of capturing the mood with a series of "LOLCat" inspired photos: 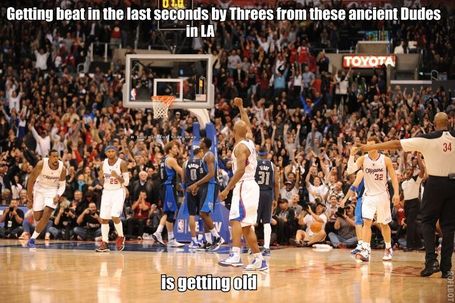 For more on the Dallas Mavericks, visit Mavs Moneyball. For news and updates from around the NBA, go to SB Nation's NBA page.