The Rangers put forth, relative to the era, likely their most impressive offense in franchise history in 2011. They ended the season with six hits and three runs in a narrow victory.

Yet the way the game was won will forever go down as one of the most perfect endings the franchise has ever seen.

You see, this season, the franchise that has dominated the AL West for so long, the team so many Rangers fans hate with fiery passion, decided Mike Napoli did not fit with their team, despite being awesome, and dealt him to Toronto for Vernon Wells and one of the most laughable contracts in baseball history The trade, on paper, was so absurd it was immediately mocked by almost every baseball pundit alive, and the Blue Jays added extra spice by then dealing Napoli to the Rangers.

The result? Wells can easily be found by going to a Major League leaderboard and sorting by On Base Percentage; lowest to highest. Napoli has been one of the most productive hitters in baseball. The ridiculous trade ended up being so unimaginably great for Texas and bad for Anaheim that it may well have been the difference in the AL West in 2011.

So, it was perfect that the final three runs of the season, the only runs scored in game 162, and the three runs that made it possible for the Rangers to set a franchise record with 96 wins, all came off the bat of Mike Napoli. With two home runs, one in the ninth with Michael Young on, Napoli stuck it to the Angels one final and poetic time, and lifted the Rangers to an important and dramatic win.

96 wins make this the winningest Rangers club ever. Tomorrow morning, their third order record will likely be something ridiculous like 104, the best in baseball and assuredly by far the best in franchise history. When the Indians couldn't hold of the Tigers, the Rangers (meaning Mike Napoli) did it themselves and guaranteed themselves homefield in the first round of the playoffs. It's not that the Yankees would have been impossible to beat, but getting an extra home game and a weaker (and depleted) opponent is much more favorable. For a month now, almost everything has gone right for Texas, and hopefully that will continue in to the next.

This has been the best Rangers team ever, and a wonderful season, but the stressful, and perhaps best, games are coming. Starting Friday.

Now who are they playing? 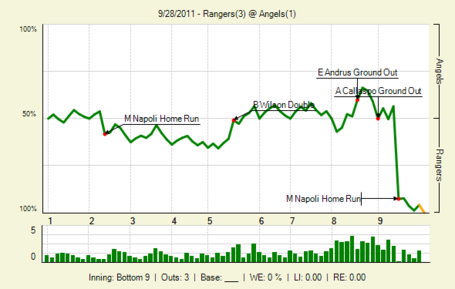 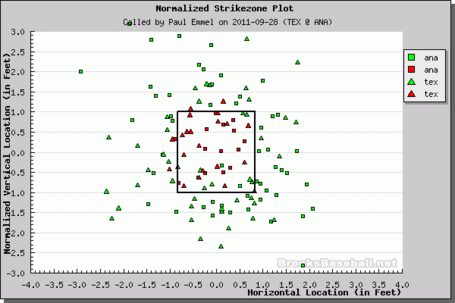