This game is stupid. I have to work early so there will be no recap. I’m sorry. I know you wanted to read about this game.

Written by on intrepid SB Nation Dallas-Ft. Worth author during Tuesday night's Rangers-Mariners game. Fortunately for Rangers fans, the game did not remain stupid, and sometimes games are just too good to go to bed right after.

This game feels like it was just played: the Rangers' game seemed hopeless late, while the Angels recorded a victory elsewhere. This same situation showed up just three nights ago, and the Rangers won there, just as they did here. All 2011 it felt like the Rangers were doomed when they trailed late, and they have certainly "struggled" in close games, but recently it seems like they've been making up for it in spades, all with a division opponent breathing down their necks.

Through the first two innings, the Rangers and Mariners traded runs back and forth, sitting at 3-3 after the second. Alexi Ogando, just back from maternity league, was unfortunately not able to make it to a fourth inning without giving Seattle a 6-3 lead. Ogando was completely ineffective, striking out none, walking two, and giving up loads of hard contact -- to, remember, the Seattle Mariners -- in his two and two-thirds innings. The Rangers, meanwhile, could not again go after Michael Pineda, and that seemed like that.

Pineda was incapable of going the distance, though, and the Rangers punished the Mariners pen. Mitch Moreland began the seventh with a walk, and an Ian Kinsler home run off of Josh Lueke made the game interesting. In the eighth, Nelson Cruz walked, stole second, and Yorvit Torrealba delivered a two-out double to tie the game. It serves as a reminder that no three-run deficit is a lost cause. Of course, after the Cleveland series, that should go without saying, and the Rangers' expectations of winning were never even as low as one-in-ten, but until the Kinsler home run, things felt pretty hopeless.

For its part, the bullpen kept the Mariners from scoring again, allowing the Rangers to comeback. Yoshi Tateyama, Darren Oliver, and Mark Lowe were all great, combining for five strikeouts against one walk in their four and a third shutout innings, but the standout was Mike Adams. Finally showing the dominance Rangers fans were promised in the deadline deal to bring him to Arlington, Adams allowed a soft single to start eighth, but followed with three effortless strikeouts. The ninth featured Neftali Feliz following a two out walk with a strikeout to bounce back from his nightmarish previous outing, and the Rangers offense followed without recording an out. Kinsler walked, Endy Chavez advanced him on a bunt single, and a Josh Hamilton single to left center was just soft enough to bring Kinsler home for the winning run; that for Hamilton's fourth career walk-off. Those of us who quit on the game felt like idiots. Elated idiots.

The Rangers are delivering more than enough comebacks to go around these days, and they keep the Angels at bay for a little while longer. With the victory, the Rangers are now the fourth MLB team to score 100 more runs than they've allowed in 2011, joining the Yankees (165), Red Sox (147), and Phillies (129). The next closest team to Texas, the Cardinals, sit at +52.

Just one game for the record, just one game maintained for the divisional lead, and just one run  added to the differential, but after the first six innings, it feels like so much more. 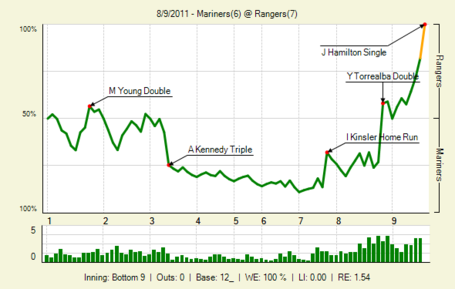 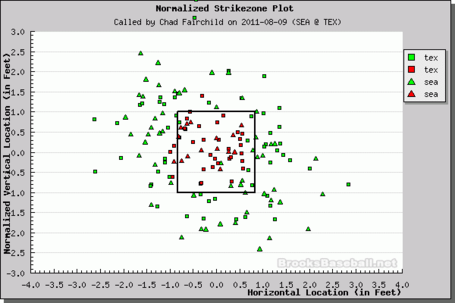