Share All sharing options for: Rangers Dominate Mariners In Opener

After the heart-stopping series against the Indians, a nice, easy win was in order. The Rangers delivered Monday night.

The thing to remember when blowing out bad teams is that even the worst teams don't average a huge loss. The Mariners still manage to score only half a run less a game than their opponents, so while they are certainly easier to dominate than most teams in baseball, beating them by seven is still a good accomplishment. Of course, it also goes without saying that a win over a bad team is still a win gained in the standings.

Matt Harrison made mincemeat of the hapless Mariners offense, with 11 swinging strikes, six strikeouts, and no walks in seven innings. He surrendered a few hits and two runs in a shaky third inning, but he managed to lock it down and face just one over the minimum the rest of the way before departing in favor of the bullpen. Mark Lowe and Darren O'Day combined to allow a lone single to polish off an easy victory.

The Rangers, meanwhile, worked Seattle for an impressive seven walks, coupled with 15 hits for nine runs. You probably expect more than nine runs when 22 runners reach base, but only two of those hits went for extra bases: a double and a home run, each from Nelson Cruz (who also led with three hits). You also don't necessarily expect David Murphy -- even with the season he's having -- to come up with seven men on base and only manage a single RBI on a fielder's choice ground out. To be fair, he had a line drive turned in to a surprising double play at first, and worked a walk, but it was still another tough night for Murphy, as he was the only Ranger to go hitless.

With the Angels idle, the Rangers gain half a game of AL West leadership. With a victory tomorrow, Texas would become the fourth team this season to put forth a 100+ run differential. No other team outside of Philadelphia, Boston, or New York has even reached 60+. Tonight is a reminder that, even if they have had an inconsistent patch or two, the Rangers are a very good team. 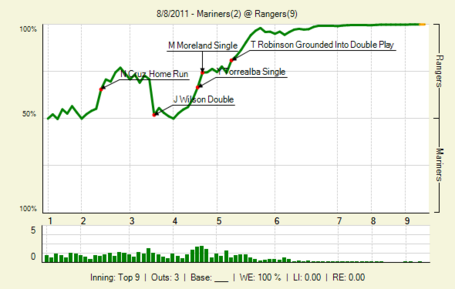 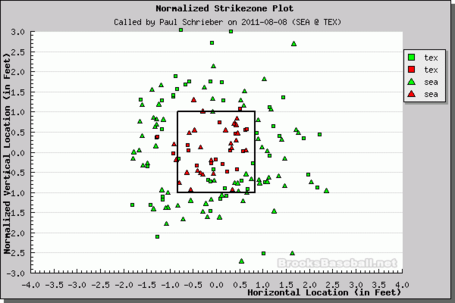