The script seemed to be written when the eight inning began Sunday.

Colby Lewis pitched well enough to win most nights. The fastball velocity wasn't there, and he couldn't throw it past anyone, but he threw strikes and managed to get whiffs on 8 of 89 secondary pitches. With three strikeouts to one walk, he allowed three earned runs in 7.1 innings pitched in a season where quality starts from last season's break-out stud have been sadly rare.

Meanwhile, when the eighth began, the Rangers' offense had not yet reached second based, and the script seemed to be the offense completely wasting that start. On a night when the Angels had already won. Michael Young knocked his 2,000th career base hit (congratulations, MY), but the history of the moment seemed like it would be inevitably lost in an awful ending to a disappointing series.

To that point, the Rangers offense had been stymied by Indians starter Josh Tomlin, who -- while you may have never heard of him before tonight -- has actually been having a solid season. In the eighth, however, Tomlin started to crack, walking Mike Napoli to open the inning, and then allowing a Mitch Moreland single. He was replaced by Smith, who allowed a single to Yorvit Torrealba, loading the bases with no outs. That single didn't score any runs, but it was still a 13% spike in the Rangers' dreadfully-low chances of winning.

Afterwards, David Murphy hit a pinch-hit single, Ian Kinsler walked, Elvis Andrus singled, and Joe Smith left the game with his team down 4-3, after coming in 3-0. Just like that, a game that seemed hopeless nearly the entire way was three outs from a Rangers victory. Josh Hamilton added an insurance run, and Mike Adams threw a perfect ninth to end it.

It was the perfect ending to a wild series. From an outside observer's standpoint, this series had to have been loads more fun than Red Sox/Yankees, with two ninth-inning comebacks, an extra inning walk-off-score-from-second-on-an-infield-single, and a dramatic eighth-inning comeback to finish things, complete with a milestone hit. From a Rangers' fan's perspective, it is disappointing that the Rangers were one Neftali Feliz meltdown from a sweep, but they still managed a series victory to help raise spirits that have likely been wavering over recent days.

This also means we can appreciate Michael Young reaching 2,000 hits without it being tarnished by a loss. 2,000 is no Hall of Fame "automatic qualifier," (nor is 3,000, right, Raffy?), and getting excited about round numbers is kind of arbitrary, but it is still pretty cool. It doesn't, either, come in a late-career limping season. Young's 134 wRC+ is just short of his career high (2005, 136), and he's doing it in his age 34 season. There was concern enough that Young could even provide above-average value from the DH position this season, let alone putting up a career year at the plate so late in life, and what he's done so far has been both valuable and pleasantly surprising. There are reasons Young has taken a lot of flack in the online circles of Rangers fans -- many of them reasonable -- but he is a Rangers' all-timer having a terrific season, and deserves to be celebrated on the night of an exciting Rangers win.

The still division-leading Rangers for at least another day.

Note: The author of this piece did not actually see any of the Rangers game, outside of Eric Nadel descriptions filling his mind's eye, thanks to MLB's ridiculous black-out policies. 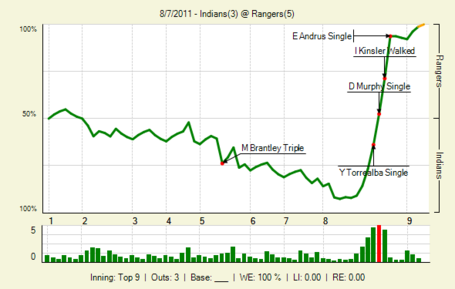