Share All sharing options for: Rangers, Everyone Hate Detroit

What can possibly be said that any Rangers fan would want to read?

The Rangers are not a good team right now. With a loss Wednesday, they have dropped nine of their past 15 games, have lost three in a row, and need an Angels loss to maintain a lead in a division that was not too long ago the most one-sided in baseball.

As a team, Texas was not out-and-out horrible Wednesday. Four runs on the road from the offense is not bad. Ten hits, with a couple walks, couple doubles, and a couple home runs (one from still-blisteringly-hot Mike Napoli) is a good showing, especially when visiting Comerica Park. No one stood out, but only Mitch Moreland and Ian Kinsler failed to reach base, with Kinsler at least having a couple hard hit balls that just happened to find leather.

Matt Harrison was not particularly good, but not because he lacked stuff. There were eight swinging strikes and velocity peaking at close to 97 miles per hour. His problem was one of finding the strike zone, with three walks to three strikes, fewer than 60% of his balls in the zone, and an inability to go deeper than six innings. Even still, without a few hits just missing fielders, the Rangers may have won the game.

The winning run for the Tigers, unfortunately, came off a new bullpen addition for the second straight night. Last night it was Mike Adams, and tonight it was Koji Uehara giving up a shot to Ryan Rayburn. Otherwise, Uehara looked awesome, but undoubtedly there will now be a sea of commotion decrying the deadline moves as failures, and the bullpen as still a problem.

Resist this. There is no doubt these two losses are upsetting. The bullpen is supposed to have gone from a weakness to a strength in a couple of nights, and the new guys have directly led to losses; just like Cliff Lee getting pounded in his Arlington debut last season, it hurts to watch. It is also just two games from pitchers with much larger track records of being awesome, and pinning the losses entirely on them is unfair, anyway. Uehara is more likely than not to dominate opposing offenses going forward, and as long as the starting pitcher can keep the runs down to help the offense, it will mean more winning.

The thing is, while there was not a whole lot of awful things in this game, an understandable loss attached to a string of losses makes for an awful stretch. Teams go through slumps, though, and the Rangers' slump still has them in first place, let alone playoff contention. Texas is a good team, with more than a 60 run lead in differential over their only competitor in the division. That does not mean they cannot lose the division, but it is a good sign that this is just a slump and not a bad team starting to play badly.

It's just not fun while it's happening. 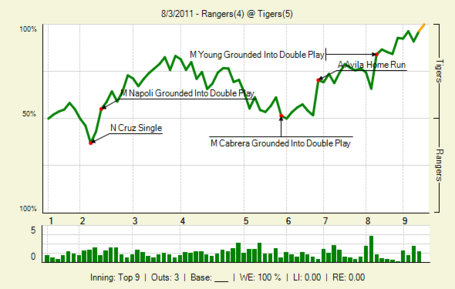 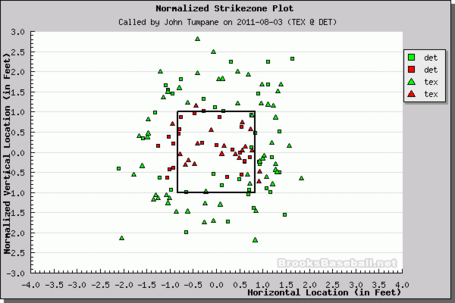