There was one thing that kept Monday night's game from being awful: a Rangers win.

Thanks to one half of the action involving the Boston Red Sox -- and an especially methodical Erik Bedard -- the game plodded along at a methodical pace, carrying a 1-0 score in to the bottom of the sixth. It was the kind of game that casual baseball fans like to point at to say baseball is slow and boring and nothing ever happens (and they would have been right about this game).

To that point, the only run had been an Elvis Andrus single to bring home Craig Gentry. With runners at the corners, Andrus was then caught stealing, followed by a Josh Hamilton fly out, and the biggest offensive threat through nearly the first two-thirds of the game was ended.

Then strolled forth the man the former-class of the division didn't want. Following singles by Josh Hamilton and Michael Young -- and a Nelson Cruz strikeout to make it two down -- Mike Napoli hit a rain making blast off Bedard; a ball that traveled through the air for seemingly as long as it would have taken Bedard to throw another pitch before falling down in to the seats for a three-run home run. In one moment, a close contest was on its way another one-sided Rangers over Red Sox game. It is hard to imagine a franchise would rather take on one of the very worst contracts -- and hitters -- in baseball, and make room for another one of the worst hitters in baseball, to get rid of this beast of a man who has delivered 21 big home runs (and the second best wOBA in the AL with am minimum 300 PAs), but they did and the Rangers are reaping the benefits.

Meanwhile, there was C.J. Wilson. Without names like Youkilis, Ortiz, Drew, or Ellsbury, the Red Sox offense is certainly missing some danger, but they don't take it from just about the best offense in baseball to a squad you can expect to shut out. Still, that is what the Rangers did, led by Wilson. He spent the first few innings -- according to Steve Busby and a glance at pitchf/x -- trying to figure out tonight's strike zone and what his pitches were doing, but what he found resulted in 6.2 shutout innings with four strikeouts, two walks, and just four hits allowed.

He was replaced by the intended three headed monster of the Rangers' bullpen, and they followed suit. Koji Uehara got a quick ground out, and Mike Adams struck out two in a perfect eighth. It had the feel of playoff preview, with the starter exiting from a hard-fought game, and handing it over to a relief squad that should be as lights out as they come to close out the win over an AL East juggernaut.

The third portion of that trio, of course, is one Neftali Feliz. A quick glance at Mr. Feliz's line does not look so good, with two walks, but both walks came with clear strikes being called low. Now the low strike is non-existent for a lot of umpires, so that may be nothing new, but as you'll see on the plot at the bottom, Paul Nauert called low strikes all evening. By rulebook and by the zone that had been established that night, Feliz more likely had a two strikeout perfect inning to close things out, an inning where his breaking stuff looked good and he touched 99 with the fastball. It was made even more annoying by Ryan Lavarnaway confidently walking towards first on a 3-1 strike down the middle, and then being rewarded by a wrong call sending him to first, anyway. Just serves as one more reminder that human beings are inadequate at officiating baseball games and should get help (same goes for Mike Napoli being hit by a pitch and not being awarded first base).

It was not necessarily a dominant appearance from Feliz, but it was solid, and looked very nice next to the Uehara and Adams outings. And, thanks to Ian Kinsler, the walks didn't even matter.

Kinsler might win a Gold Glove. Not only that, but he might actually deserve to win a Gold Glove, which is a much more significant accomplishment. It is amazing how far he's come from his early days of great range ruined by bone-headed mistakes and poor fundamentals.

If (pretty close to when) the Rangers make the playoffs, their first round opponent will more than likely be an AL East team. Thanks in part to the Rangers themselves, that AL East team is more likely to be Boston than New York.

Texas has now won four straight over their "if the season ended today" opponent, with a total score of 30-11. 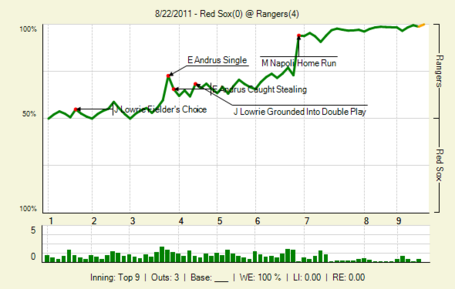