Seven Up, Twenty Over

Share All sharing options for: Seven Up, Twenty Over

After a few easy games in a row, it was apparently time for the Rangers' fans to sweat a little bit Wednesday night. The results, fortunately, were the same as they had been in the previous five games: a win.

C.J. Wilson ran in to trouble early, when a one out Peter Bourjous triple in the first inning turned in to a 1-0 Angels lead after a ground out. Elvis Andrus extended the inning with an error to set up a Mark Trumbo double, making it 2-0. With the Rangers incapable of crossing the plate against Ervin Santana, despite multiple warning track flies, the game had the makings of a frustrating loss.

That was really the only trouble Wilson ran in to, though, as he cruised through seven innings of eight strikeout/one walk baseball, with his only runs allowed (one earned) coming in the first, helped by some stellar centerfield defense from Endy Chavez.

In the fifth, a ridiculous Erick Aybar throwing error -- the kind that has to be seen to be believed -- put Elvis Andrus on second, and the Rangers finally scored when Josh Hamilton singled him home. Michael Young singled to put two on with one out, and though the Rangers wasted the baserunners, the game finally felt a little better.

The next inning, Mitch Moreland led off with a home run to tie the game, and it remained there until the eighth, when the previous two games pitched in to help. After Texas decimated the Los Angeles bullpen in games one and two in the series, Mike Scioscia left Santana in despite a massive pitch count, even after the Rangers reached the magic bases loaded/no outs scenario.

Now, in that spot, teams should be expecting to score at least two runs, so Texas fans should have been anticipating at least a two or three run lead; especially given the state of the pitcher. Santana proceeded to make it intensely frustrating by striking out Yorvit Torrealba and Endy Chavez to bring himself right to the edge of escape, and Scioscia right to the edge of being correct. Then along came Ian Kinsler with a bloop single, and the Rangers led 4-2. Koji Uehara did what he does and allowed a solo home run while looking awesome otherwise, but Neftali Feliz hit triple digits and needed just 11 pitches to end the game.

Do not begin to underestimate how big a seven game lead is in mid-August. The Angels would need to make up about a game a week the rest of the way just to tie it. As Adam Morris pointed out on Twitter, if the Rangers -- a true talent team of closer to .600 than .500 -- win exactly as often as they lose the rest of the way, the Angels would need to go 26-12 just to force a one-game playoff. And it is certainly not like the teams are close in talent level, as Texas is the vastly superior baseball team.

What is being said to you is not that the AL West race is over. It is not. History has its share of epic melt downs and incredible comebacks. There is no reason the Rangers cannot be on that list of trivia questions until the division is actual clinched. However, that is what it would take, at this point, for the Rangers to not play October baseball: something historic, memorable, and exceedingly rare. It is not a guarantee yet that Texas has defended its AL West crown, but it is incredibly likely at this point that they will. The Rangers went in to four games in Anaheim with a chance to take firm control of the race, and they have done so, with a chance at a four game sweep and even more distance tomorrow.

The Angels should not yet be forgotten, but sites should now be set on the real -- if outside -- possibility of the Rangers getting homefield advantage in the playoffs, and which AL East team they will host for two or three games in the first round if they do not.

Sites should also be set on where this team ranks in franchise history. 20 games over .500 now is the best record in Arlington since 1999, the team that won a franchise-best 95 games. Playing .500 the rest of the way would mean 91 wins, continuing their current pace would be 94 wins, and playing more to their .600-610 true talent estimation would mean making a run at that 95 win mark. Meanwhile, their +122 run differential is only seven runs behind 1996 as the franchise record. As in, quite possibly within the next series or two, the 2011 Rangers could already have set a franchise best mark at outscoring their opponents.

Appreciate what you have, Rangers fans: this is not an okay team in the middle of a pennant race, this is a heavy front running team and a serious contender for a world title. As the Angels have just seen. 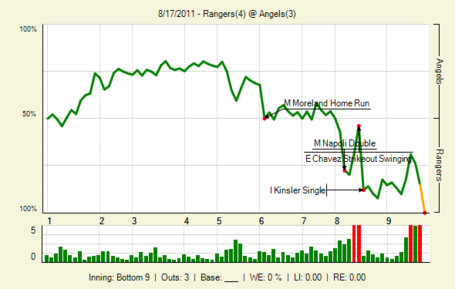 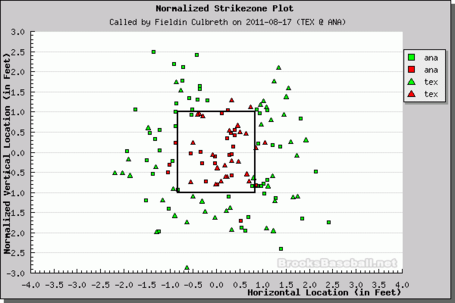 Mike Adams Blows Save, Angels Walk Off 2-1 Over Rangers