Rangers On Pace For 162 Wins

Share All sharing options for: Rangers On Pace For 162 Wins

That is a really nice way to start the season.

If the Red Sox are the best team in baseball in 2011 (and they probably are), and Jon Lester is their best pitcher (he almost certainly is), then it stands to reason there will probably never be a more daunting home game than facing the Red Sox at full strength with Lester on the mound.

So, the Rangers opened the season by winning perhaps the strongest home opponent on their entire schedule to start the season. And they didn’t just beat them, they beat them handily.

Julio Borbon had a walk. David Murphy had a clutch double. Elvis Andrus had an extra base hit. Mike Napoli and Adrian Beltre both had contributions, and the bullpen held a strong offense to just one run in 3 1/3 innings. The scored nine runs with one of the best pitchers in baseball starting. C.J. Wilson was not as efficient as one would hope, but he was facing a good offense. He allowed a few runs, but some of that was thanks to Borbon inexplicably trying to take a ball away from Nelson Cruz. Overall, this was a game to feel great about. Very great.

In other stuff, John Rhadigan was fine in his first regular season game. He fumbled a few situations, but for the most part he was no less than what most play-by-play guys offer. Importantly, he completely abandoned his "put a saddle on that ball, it’s going for a ride" home run call, mercifully. Hopefully it’s gone for good and it’s a sign he’s only going to improve. He has big shoes to fill. I was not prepared to hear a Rangers game end without someone shouting "BALLGAME!"

Also, the Claw and Antlers seem to be back, as almost every major Rangers hit had a claw. There has been a lot of discussion on whether or not those symbols of 2010 should die, but if the players still enjoy, I believe we should, too. It sure seemed fun today.

Obviously this was still just one game out of 162 (plus, hopefully), so it doesn’t mean anymore in the standings than tomorrow’s game, or the one after that, but it is very hard to start a season off better than this. Way to go, Rangers. Keep it up for a few more months. 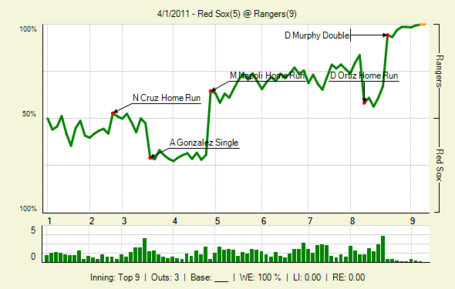