The Rangers head to their house of horrors in Toronto at less than full strength.

It's now to the point we usually hit in this part of the season: Rangers games don't have a whole lot of meaning.

Fortunately, for the first time in forever, that's mostly a good thing. The Rangers are being ravaged with injuries and are in the middle of a pretty cold run, but it would still take something historical for them to lose the division. On the other hand, it's also not so great. After the embarrassing sweep in Minnesota, the Rangers' shot of getting home field advantage in the first round are also pretty much over, as well. So we pretty close to know the Rangers will be going to the playoffs, and we pretty much know they will be traveling to the home of the AL East winner for the first two games (New York leads by 2.5).

So now we watch for Rangers wins, which are always fun, and to see how far up the list of all-time winningest Texas seasons they can get.

The upcoming series also presents a shot at exorcism. The Rangers are a narrow game won in the 9th inning on Opening Day from being winless against the Blue Jays this season, including an absolutely brutal 27-12 sweep in Toronto. A win of this series would still tie the season series, and a sweep would give it to the Rangers.

Unfortunately, Josh Hamilton is being replaced with Jeff Francoeur and Cliff Lee with Scott Feldman, so wins might be a little more rare going forward than we've gotten use to this season. 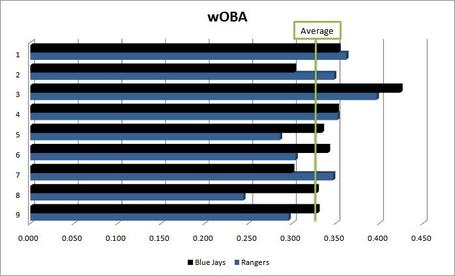 The Rangers offense looks to be really ugly for a while. If Andres Blanco can keep up his hot streak the loss of Elvis Andrus won't hurt too much, but replacing Hamilton with Francoeur likely hurts the team to the tune of approximately a full run scored every three games. Toronto is also probably sending out three lefties, meaning more Jorge Cantu than Mitch Moreland, which hurts even more.

The Blue Jays lead all of baseball in home runs, and have been a significantly better offense than the Rangers this season, anyway. The Rangers may have the advantage when they're healthy, but, right now, they're not healthy. 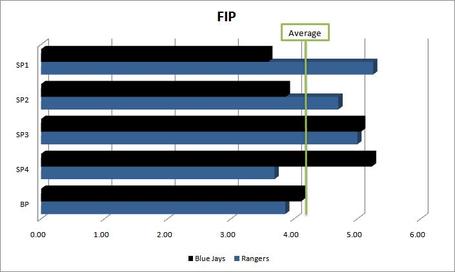 The lack of (healthy) Cliff Lee hurts the Rangers this series, but I contend Scott Feldman was better than people remember. Not good, but better than horrible.

Games one feature the better pitcher on the Toronto side by a good margin, game three is pretty close, and Colby Lewis gives the Rangers their best shot in game four. 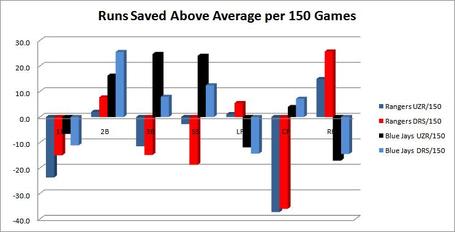 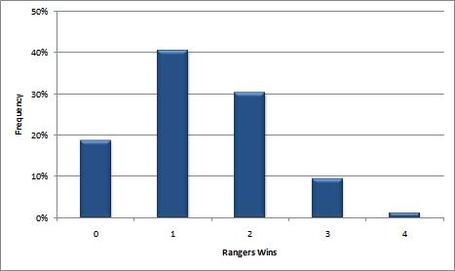 Doesn't look very good, does it? The Sommer simulation has the Rangers losing the series almost 60% of the times it's played, and winning the series looks pretty close to impossible. Losing one of four is the most common result at almost exactly 40% of the time, and the projected total score is has the Blue Jays topping 20 runs and the Rangers doing just better than 17. It's not a Toronto curse if the Rangers lose this series, it's just going on the road against a good team without your best players.

It's very, very fortunate that losing games at this point in the year isn't likely to cost the Rangers much of anything, but these games might be very frustrating to watch. What's important to remember is, as long as the Rangers can get healthy by October, this isn't the team will be watching when the games matter again. A healthy Rangers team isn't that far behind the beasts of the AL East.

The Rangers just lost game one 7-2.