The Rangers just outplayed the Twins. On the road. And yet still lost.

According to Fangraphs.com, the Rangers had seven line drives to the Twins' five. They also had 10 fly balls to the Twins eight, and if you watched the game, it sure seemed like a few of those fly balls would have been out in most ballparks. The Rangers also had one more walk and five fewer strikeouts.

The Twins had two doubles for the games only two extra base hits, but both of them were grounders skipped down the line that just barely stayed fair. In the same inning!

Derek Holland showed the talent we know he has, the Rangers' finally-entirely-in-place lineup knocked around a pitcher in his debut the way they should, and the reason the Rangers lost is less because of their own failing and more because of the crazy things that happen in baseball that aren't really in a player's control.

To be certain, the Rangers had their own mistakes, and the Twins had things they did well, without some bad luck, the Rangers win that game usually, anyway, when they play that well. Of course, that doesn't mean the Rangers are necessarily better than the Twins, ravaged by injuries and a 13 inning game the night before, but that's beside the point: for one night, the Rangers were better, but the boxscore will never tell you that.

For example, let's go here, where we can get the linear weight value (expected runs scored, on average) of each play by batted ball type and result. Two walks, six strikeouts, 13 ground balls, five line drives and eight fly balls comes out as 2.04 expected runs for the Twins. For the Rangers, three walks, one strikeout, seven line drives, 15 ground balls and 10 fly balls comes with an expectancy of 4.968 runs. So, when two teams hit like that, the score is more often going to be closer to 5-2 Texas than it is 4-3 Twins.

That ignores some things, like just how well those balls were hit and the situations when they were hit, but, having watched that game, it sure as heck looked like the Rangers were hitting it better. Just more of those hard hit balls found gloves when they'd more often be a couple inches over in any direction, or sail over the fence. And a few of the Twins' weekly hit balls just found gaps that normally they would not.

I'm not entirely sure how I'm supposed to feel about this. On one hand, it's a great sign for the Rangers, showing promise for how well they can play. On the other hand, it's a squandered golden opportunity to pull a little closer in the race for homefield in the first round. It probably comes down to people who prefer to lose on things within their (or their team's) control vs. people who prefer to lose despite doing everything right due to factors out of their (or their team's) control. I'm interested in hearing responses.

Oh, and speaking of things out of a player's control, there was also this: 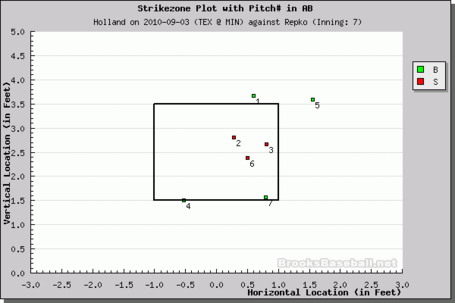 Now, this wasn't too bad, actually. I don't think it's worth ripping Bob Davidson's head off over, and he called a good zone. But it sure doesn't look like Derek Holland should have had a walk all night, particularly not with a 3-2 lead and one on with one out in the 7th inning.