The Rangers' pitching, of all things, gives them a really good shot of controlling their own destiny in the race for home field advantage in the first round of the playoffs.

Share All sharing options for: Rangers And Twins Battle For Home Field Advantage

Back to harder games. This is also probably the last series the Rangers will play in the regular season where both teams are in direct competition of the same thing. This series will decide the nature of the race to get an extra game at home in the first round of the playoffs. If I may borrow a page from the book of the Great Christopher Fittz, these are the four possible outcomes for the Rangers this series:

It goes without saying, then, that winning this series is likely imperative if the Rangers want to play games one, two and five in Arlington. It will take a sweep to control their own destiny, and a sweep of the Twins in Minnesota, for so many reasons, would have to be one of the biggest moments of the Rangers' season if it happens. Merely taking two of three would make thinks pretty close to a toss-up. Losing the series wouldn't be a death sentence, but it would make things pretty hard. Getting swept would probably mean the only question left in the AL playoffs is which of the Yankees and Rays has to travel to Minnesota to start the playoffs.

It's not exactly a pennant race, but it's the last big series we're likely to have before the games are on TBS, so let's make it fun.

Here are the top five Twins players at Fangraphs.com in Wins Above Replacement, or, in other words, the estimated number of extra wins the Twins have had with them playing than they would have with a roster-filling scrub. If there's a stat you see here that you're not familiar with, make sure to use the friendly links at the bottom.

It hasn't been too long since we last looked at the Twins, so I don't have too many new observations on the elites of their roster. Morneau has finally been passed on the leaderboard by the greatness of Francisco Liriano, though, thanks mostly to a lot of time on the DL. 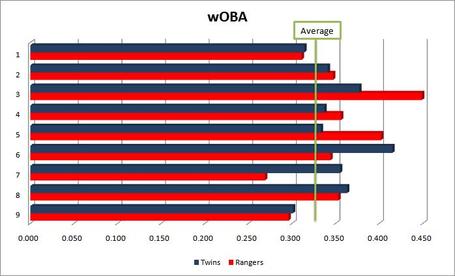 This graph just sizes up both lineups by the probable starters at each spot in the order through the series in weighed On Base Percentage.

The Twins have one of the best offenses in baseball this year thanks in large part to excellent depth. But you'll notice the Rangers beat them at four spots and are very close in three others. The Twins are the better offense (and that's not park adjusted), but when the Rangers are healthy and the Twins don't have Morneau, the Rangers have a really good chance of standing toe-to-toe with Minnesota's offense.

That depth is getting stressed too. Morneau is out for yet another Rangers series, as is Nick Punto. Further, three of the players who have stepped up to make up for their loss are currently injured. Kubel and Hudson haven't played in two days, Thome has only pinch hit in that time. At the moment, I don't know if they're going to play or not. In the interest of being conservative, I'm going to assume they will, but their missing could make a big difference and that's something I'll address later.

Of course, the Rangers have a similar situation. No offense to Andres Blanco, who has been on fire of late, but the news of Ian Kinsler's activation is huge and could mean a lot for the Rangers' chances of seeing at least two guaranteed home games in the playoffs. 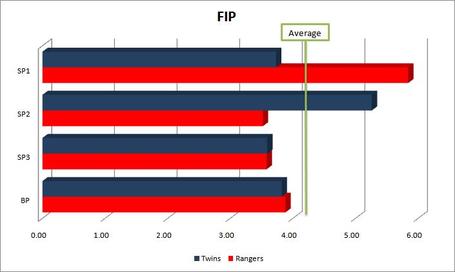 Here is each starting pitcher (and the pens) is compared by Fielding Independent Pitching.

Originally, these pitching match-ups looked pretty close in each game. The Rangers really have the slight pitching advantage when you consider the Ballpark in Arlington skews their numbers a bit, Holland has likely been a bit unlucky on the number of his fly balls that leave the park, and Brian Duensing probably just isn't that good.

But now there are some questions. When I started putting this together, we had our probable starters, but then Duensing and Blackburn both pitched in relief against the Tigers. Last I heard, Carl Pavano would start game one, but there have also been reports of Matt Fox, who has a 4.60 FIP in 123 AAA innings, to make his Major League debut. I still have Blackburn starting a game in the series for these purposes, but it's quite likely someone even worse will go. What's worrisome, though, is the potential for Liriano to come in on short rest in place of Duensing or Blackburn. If he handles short rest well, then the Rangers' pitching advantage likely disappears.

The best case scenario is probably Fox, who is no strong bet to be better than Blackburn, to start the opening game and for Blackburn to show up in game three. That means Pavano is the only starter with a good chance of doing particularly well and Moreland can have the platoon advantage every day.

Blackburn throws mostly low-90s two-seam fastballs and the occasional change and curve. He's good at getting balls in the strike zone, just not at avoiding contact.

Duensing throws fastballs of both four and two seam vareties just over 60% of the time, also in the low 90s and splits the rest of his pitches between slider and change, coming in at an average of 81 and 84 miles per hour respectively. Like most Twins pitchers, he hardly ever surrenders walks.

Pavano is nearly 80% fastballs (low 90s) and change ups (low 80s), splitting the three fairly equally. The rest of the time is a slider and, occasionally -- at least according to Pitchf/x -- a splitter. As is the Twins way, getting two walks off of him is a wild success. 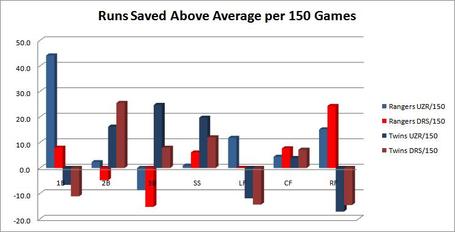 The last part is a fielding estimate between every probable position player in Defensive Runs Saved and Ultimate Zone Rating (pro-rated to 150 games played). Take this with a huge grain of salt, particularly when it's only a season (or less) of information on an individual player. See Mitch Moreland's UZR bar? Yeah, that's mostly misleading.

Anyway, both teams have been fielding pretty well this year. DRS thinks the Twins as a team are much better (close to 30 runs, in fact) while UZR has them pretty close. Their strenght is the infield, while the Rangers boast a strong outfield.

Alright, as far as what to expect from this series, I take each of the previous three components, apply some regression and shove them in to a simulation tool provided by Steve Sommer to get an idea of what's most likely to happen. 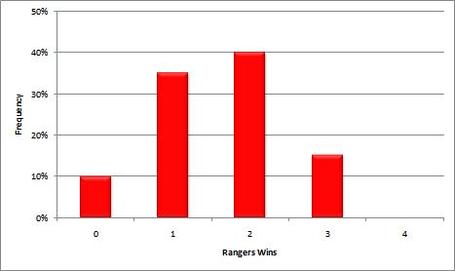 Meaning this here thinks, in three days, it's likely the Rangers will be looking at just a half a game to make up between now and the end of the season to get home field.

And that's probably where our expectations should probably be, slight favorites. But, this uses the probable starters as of Friday night, and we've already discussed some questions there. Here's how some of those changes affect the simulations odds.

So, a lot of this series depends on the match-up questions. If Kinsler can go and if the Twins injuries don't heal up, the Rangers could be massive favorites to take the series. If things go as expected, they're probably still at least somewhat favored here. Even if the injured Twins play, who knows if they'll be 100%. And the Tigers really ate in to the Twins pitching, so even if Liriano goes on short rest (and is fine doing so), the pitching advantage might still be close enough to put the Rangers on top.
The Twins are a good team, and going on the road is tough, but we should probably be expecting the Rangers to win at least two of their next three games, anyway. If the don't, it's certainly not a bad sign for the Rangers, but it's probably time to start watching the AL East to see which ballpark Texas will be traveling to to start the playoffs.
As always, go Rangers.