Share All sharing options for: Quick Rangers Vs Mariners Preview

With the division over, there's not a whole lot to look for in the remaining games of the season. Further, there's no real telling who will be playing in the games, making projections pretty hard. The Rangers appear interested in giving key position players rest, as evidenced by the "give-up-but-still-score-16-runs" lineup used in Oakland Sunday. There has also been talk of resting starting pitchers and, in fact, Scott Feldman and Rich Harden are currently scheduled to pitch games two and three of the upcoming series against the Mariners per MLB.com. And who knows how much the key elements of the bullpen will be used.

And, of course, these last two series will be against opponents we've already seen 15-16 times and know very well. With that in mind, I'm not going to pretend to put up a full projection of the series when all we can do is guess who will be pitching, but I can give a little bit of a prognosis based on what we do know.

Even if the division is wrapped up and homefield in the first round is all but over, there are still some things worth watching for this late in the season.

The Mariners in this series will be throwing Felix Hernandez and Jason Vargas at Texas in games two and three. We have seen both of them very recently, with Hernandez nearly no hitting the Rangers and Vargas getting smacked around a little.

Game one will feature David Pauley, who has not started against the Rangers this year, but he did make a relief appearance where he made quick work of two hitters. That's it. He primarily throws a high 80s fastball with a changeup thrown roughly a quarter of the time serving as his main secondary pitch; it comes in around five miles per hour behind his fastball. After that, around 16% of the time he throws a mid-70s curveball that doesn't get a lot of movement. He hasn't been a very bad starter, getting more than five strikeouts per nine innings, but he will give out a few walks, as well.

The rest of the things about the Mariners you know. Their offense is historically bad, and, thanks to injuries and call-ups, it's extra bad right now. Their defense is good, but not as good as it was expected to be.

A (relatively) reliable sim of the series is rough since we don't really have a guess as to who will be playing for the Rangers and how often. However, with how many injuries the Rangers have had this season, making a sim based on the average production at each spot over the long season is probably not a half bad guess. Here's what that comes up with: 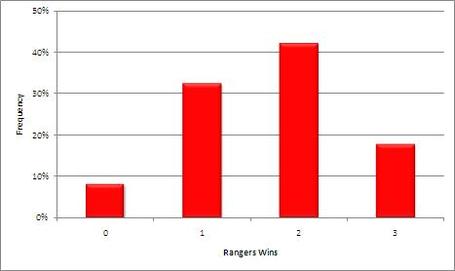 Even without starters going every game, even with Feldman and Harden pitching, it likes the Rangers to win the series just over 60% of the time. The most likely result, two out of three 42% of the time, would live us at 89 wins and the Mariners at 98 losses.

Again, however, who knows? The Rangers may go with a lot of rest, but then we just saw a team of mostly non-factors in October crush the Oakland in the coliseum. I think this is a series where you don't really need to bother with expectations, just be happy with anything good that happens and get mentally prepped for October.