Rangers Have Good Chance Of Clinching In Oakland

The Rangers try and put the division away once and for all in Oakland, and a rash of Athletics injuries may get them there.

Share All sharing options for: Rangers Have Good Chance Of Clinching In Oakland

Well, it sort of seemed like it might be over before now, but it's not. This might be the last meaningful series of any type this regular season for the Rangers. They head in to Oakland where each win drops the Magic Number twice. Thanks to an abysmal road trip, it's going to take at least a split to clinch in Oakland. In a way, maybe that's a good thing; clinching at home means thousands of cheering Rangers fans and celebrating on their own field, instead of in front of a handful of tepid A's fans (and Christopher Fittz).

Winning this series, meanwhile, would mean something a little bit important: the Ranges would win the season series, which currently stands at 8-7. Unfortunately, they'll have to break out of a slump to do it on the road against the always-annoying Oakland pitching.

Oh well, at least the games aren't that meaningful. There's really just not much to say at this point, and Rangers fans are certainly familiar with what Oakland brings. So, rather than waste your time with a whole bunch of words, I'll keep this short and give you the typical comparisons.

Notice that Coco Crisp has been worth 3.2 Wins Above Replacement at FanGraphs in only 328 plate appearances! He's having one incredible year. He's also probably out of the year, so nothing the Rangers necessarily have to worry about.

Barton, also, is questionable for this series. I'm going to go ahead and assume plays, but the A's may just be without their two best players against the Rangers. Kouzmanoff is also day-to-day and sat Tuesday, but played Monday. 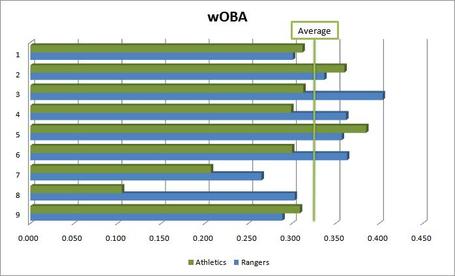 If Daric Barton misses any time, the only Athletic having an above-average season in the regular lineup this series would be Jack Cust. Albeit in small sample sizes, replacements like Carson and Carter have just been abysmal, and good depth like Adam Rosales is also currently injured. Some of those lines are affected by the ballparks, but the Oakland lineup the Rangers pitchers will be facing this series will likely be the weakest they've seen from them all season. It's a better opportunity for winning games than we've seen against the A's yet.

As far as the Rangers, first base is a question this series. Mitch Moreland has been in a slump lately, but his walk, strikeout and line drive rates haven't changed; what's changed has been the number of his fly balls that have stayed in the park (regression) and the number of hit balls that have found fielders' gloves (bad luck). He's still probably the Rangers' best option at first base based on 2010 evidence, but there's been talk of giving Chris Davis playing time. Davis's .268 weighed On Base Average has been significantly worse than even Moreland's September slump. It may make sense to play him to see if he can realize some of his potential while the games are mostly meaningless, gearing up for October, but it's unlikely to help the Rangers win more games. 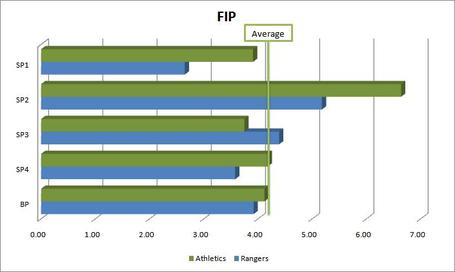 What is this? The Rangers hold the (on paper) pitching advantage against the Athletics in a three game series? Incredible!

It favors the Rangers even more when you consider how much the respective ballparks skew their numbers. Cliff Lee is better than almost everyone, so that's no offense meant to Braden. And while Tommy Hunter hasn't been very good, Bobby Cramer, in all of 11 IP, has been terrible. That leaves Holland vs. Gonzalez as the only game where the A's starter is better at getting strike outs, avoiding home runs and not giving out walks.

Cahill-Lewis has all the makings of yet another frustrating Colby Lewis start. Cahill is good, but he's not nearly as good as his ERA would have you believe, he's pretty lucky. Unfortunately, he just seems to absolutely own the Rangers. But remember what I said about Felix Hernandez? About how the Rangers are one of the few teams that hit him, but betting on that kind of thing to continue is usually a losing strategy? Take heart, because the same thing holds true here, as well. Cahill may have a match-up advantage over the Rangers beyond just being a lefty who doesn't rely on fastballs all day, but more than likely the extreme of his success is primarily the luck of distribution, and that luck will run out eventually. It may not be in the last game of this series, but there's no reason to assume it won't be.

Braden's fastball only touches the high 80s, but he mixes up the movement on it, throwing pitches that register as two-seamers and cutters regularly. Around a fourth of the time he off sets them with a glacially-slow low-70s change up, and finishes his repertoire with a slider he throws about a fifth of the time. He has no velocity, doesn't hit the zone particularly often and never gets swinging strikes, but he still finds a way to be successful, striking out just over five per nine while walking around two.

Cramer's made two starts in the major leagues, averaging just under six innings per start and giving up only three total earned runs. He hasn't been nearly that good, though, with fewer than five strikeouts per nine and more than three walks at the same time. He appears to have shown a propensity for meatballs in his short time that get pulled out of the park at a good rate. In his brief time, he's thrown a high-80s fastball and high-70s curve ball about 40% of the time each and a change up that comes in at roughly the same speed as his fastball the rest of the time.

Gonzalez stands out from the other three starters this series with more walks per nine innings but also a lot more strikeouts. He's the one with the "stuff" in the group, getting in to the 90s with his fastball, which he throws nearly two thirds of the time, and getting a lot of outs with his hard breaking curveball he throws almost the entire rest of the time.

Cahill is a fairly similar pitcher by repertoire to Braden, with a tad more velocity (a lot more on his change up). His primary fastball actually registers as a two-seamer, which he throws more than half the time. His change is not nearly as slow as Cahills and he throws it a little less often. He gets strikeouts at roughly the same rate, but also issues nearly a full extra walk per nine.

The A's bullpen has been alright this season, but by far their best reliever has been Andrew Bailey, and he is likely out for this series, giving the Rangers one more advantage. 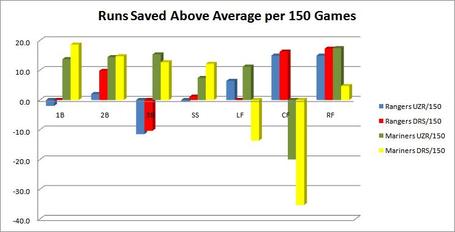 The A's have had the pretty hefty fielding advantage over the Rangers most of the season, but losing Coco Crisp and having to move Rajai Davis to centefield helps negate quite a bit of that. In fact, while there's always a small sample size warning (among other things) to defensive metrics, if Davis or Moreland starts at first this series, or if Daric Barton doesn't play, the advantage (on paper) likely points to the Rangers in these four games. First base is where the big difference lies in these games. In any case, the fielding talent of both teams is mostly a wash here. 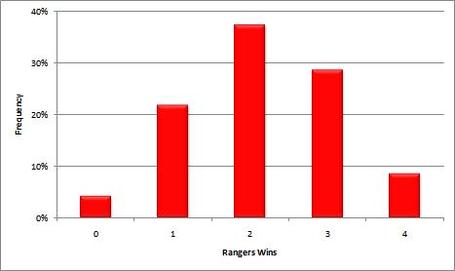 The Athletics have posed some match-up problems for the Rangers through a lot of this season, but a simulation of the two teams projected to play this series (finally) favors the Rangers a bit. Texas projected at just over 18 runs scored, and the A's just under 17 in the series. Game one heavily favors the Rangers, games two and three comfortably favor them, and game three comes in as a toss up. The result is the Rangers winning the series 39% of the time in the sim, though a split comes out as the most likely single result almost as often. The combination of results that would end the American League West in Oakland adds up to an 86% chance.

Kicking out Daric Barton for Jeff Larish, by the way, jumps the Rangers' chances of winning up to about 41% if you zero out Larish's defense. The usual cautionary notes go with the simulation, and I probably don't need to list all of them for you. This is just an estimate. The A's have been hot lately and the Rangers have not been, but streaks end eventually. The injuries the A's are suffering makes it very likely, in this estimation, the next time the Rangers play in the Ballpark in Arlington, they will be the American League champions.