The Rangers will face some nifty pitching in Safe Co as the season begins to wind down. The Mariners' pitching likely isn't enough, though.

The Rangers are now handing off to the running back every play. They're dribbling out the clock. They're two-putting the 18 with a five-stroke lead. They're keeping the puck away and the other team isn't even bothering to pull the goalie.

In other words, the season isn't technically over, but it might as well be over. There is no more chance for spoiler. There are no more playoff previews. Even if the A's win out the Rangers only have to go 8-9 to win the division. For the Texas Rangers, the next 17 games have very little, if any, meaning. All that's left are some divisional games. There will be a celebration when the fourth division title in franchise history becomes official, but it's now a forgone conclusion. The important thing is to strike a balance between making sure every player is 100 percent by the playoffs and making sure they're sharp enough to access that 100 percent. The focus is on being the best October team than can be, not winning as many September games as they can.

Of course, wins are still nice. For one, there's the Rangers' spot in franchise history. Each win between now and 91 moves this team up a spot on the all-time winningest season list in team history. This year currently stands alone in 16th place.

On a personal note, these games actually matter to me a lot, despite their lack of meaning on the Rangers' season. I will be at all three, and that will mark the first time I've seen the Texas Rangers since the infield was made up of Will Clark, Jeff Frye, Manuel Lee and Dean Palmer, and I could count my age on my hands.

There are several solid Mariners this year. Looking at a list like this, it's pretty hard to figure out how a team could lose so many games with these guys. And then you realize how massive a drop off there is after the top five.

Cliff Lee, by the way, is still second among the Mariners. That's not including his time in Texas. 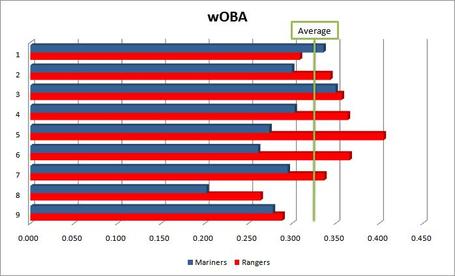 Just look at that. That's horrible. This is a very, very bad offense. They barely score three runs a game. THREE! This is one of the worst lineups ever to feature a DH. That's what happens when you have four players in your every day lineup hitting worse than Julio Borbon (and a fifth is close). Only two hitters in that lineup for the Ms have been above average by weighted On Base Average. Some of that is the ballpark, but they're bad even after you park adjust. 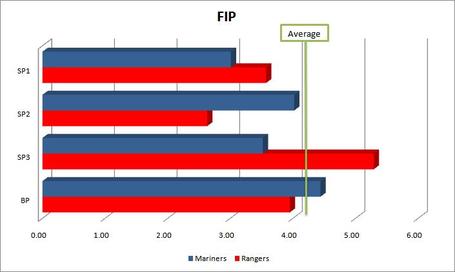 Hernandez belongs in the Cy Young conversation and, at this point, is just beginning a drive towards Cooperstown that could likely only be interrupted by an injury. He's been an All-Star-caliber pitcher for five seasons now, and is one of the best in baseball. And he's only 24, by the way. I did not know this until right now, but he put up 2.6 Wins Above Replacement as a 19 year old in only 12 starts! Anyway, he throws fastballs a lot, and his change-up is just a tick under 90 MPH. It's only about 4-5 mph behind his fastball, but that's all it takes to be one of the most effective pitches in baseball. Just because he's cruel, he also has a slider and a curve, favoring the latter more often. Fortunately, the only team that he doesn't seem to dominate is the Rangers. Unfortunately, betting on that kind of thing to continue is usually a losing strategy.

Vargas being a good pitcher is a testament to how valuable avoiding walks can be. He's a very vanilla pitcher, throwing breaking balls less than 10 percent of the time, filling most of his pitches with simple fastball/change-up combos at roughly a respective 2-to-1 ratio. The fastball struggles just to get in the high 90s and he doesn't get a whole lot of strikeouts, he just manages to keep the ball in the zone without getting hit too hard. If you do that, you're going to be effective. Perhaps easier said than done, but a lot of pitchers seem to fly under the radar with that sort of approach.

Fister is pretty much the same pitcher, just using a different arm. He throws a few more breaking and fast balls, and gets a little more velocity, but his primary skill has been the same as Vargas but even better: avoiding walks. His Fielding Independent Pitching ERA is 0.7 runs below his expected FIP, which suggests he's been pretty lucky on the number of fly balls that have stayed in the park (SafeCo?), but he's still been a solid guy on the mound for Seattle when very few probably knew his name prior to the season.

The Mariners' bullpen isn't completely horrible, particularly Ryan Madson and Jose Contreras, but it's nothing to fear, either. 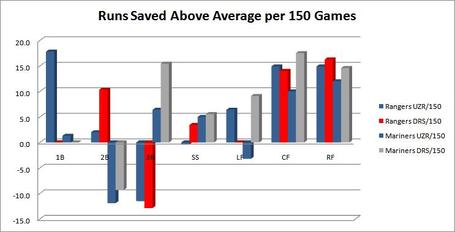 Despite their hyped focus on defense, the Mariners as a team come in to this series slightly behind the Rangers in Ultimate Zone Rating, though well ahead of them in Defensive Runs Saved. Splitting the difference among just the players in this series gives the Rangers the slightest of edges, but, as usual, take defensive measures with a grain of salt over a small sample size.

So, the question is: are the Rangers' hitters far enough ahead of the Mariners' lineup Texas has the advantage even on the road against such quality pitching? 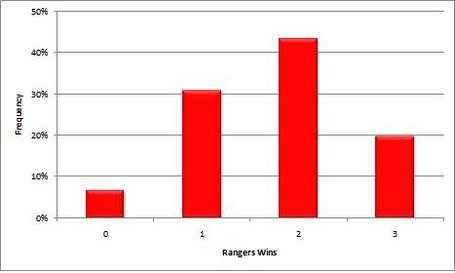 Despite going on the road and facing some good pitching, the Rangers come out winning the series approximately 64 percent of the time. The most likely result, as usual, is two out of three, but they get the sweep (and a 10-game winning streak) a not-dismissible 20 percent of the time. That's a little more often than the sim said they'd sweep the Yankees!

It's predictably set to be low scoring, with the Rangers scoring just about 14 runs through three games; that's still almost two runs ahead of the Mariners' expectation. Game one slightly favors the Mariners thanks to King Felix, while Cliff Lee makes the Rangers massive favorites in game two. Game three comes out looking like a toss-up, but the sheer weight of Lee's dominance shifts the series heavily by itself.

Of course, something to remember is the Rangers may begin resting a lot of key players here on out, and that will lower their chances of winning games a little bit. A benched Cruz here and an off-day for Young there and the Rangers might just lose a series they otherwise would have won. For this preview, the assumption is more typical playing time, but if that doesn't happen, it's a good thing for October.

And, of course, if those losses are to the Mariners, it hurts their draft position.