If you weren't at the Ballpark in Arlington on Friday when the Rangers were lifted by a pair of Boomstick Cruz-Missiles, including the walk off in the 13th, then you likely missed Captain Morgan throwing out the first pitch. The Captain has been on tour throughout the country throwing out the ceremonial first pitch and Friday night it was time for him to throw out the first pitch and 'party with the fans' at the Ballpark in Arlington. He was escorted by the Morganettes and posed with coach Johnny Narron - who struck the Captain's pose. Picture evidence after the jump.

Not surprisingly, Captain Morgan himself still manages to strike the pose while throwing out the first pitch. 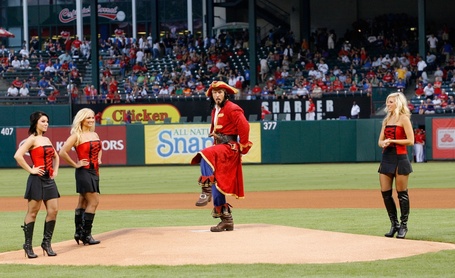 Prior to the game as well, Rangers coach Johnny Narron struck the pose with the Captain and the Morganettes. Quite the amusing awkward expression on Narron's face. 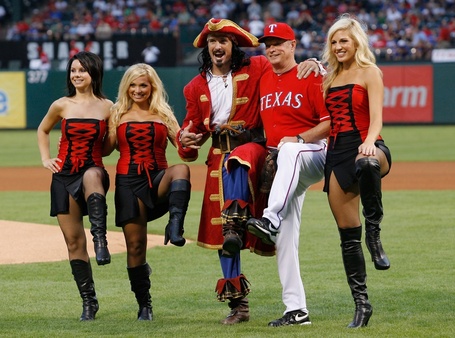 At the very least, Captain Morgan brought the Rangers some bit of good luck as Nelson Cruz tied the game with a home run in the eighth and won it in the 13th with another home run. Then again, Nelson Cruz's boomstick has enough luck in it on it's own right.

If you were lucky enough to be at the game and saw Captain Morgan and the Morganettes, feel free to post your own pictures or share your experiences with us. Must have been an awesome game to attend with the Cruz heroics.

Special thanks to Kelly Greenawalt and Getty Images for the pictures.