What We Learned In Toronto

As bleak as things looked after the second game of this series in Toronto, the Rangers battled back and split the four game tilt with the home run happy Blue Jays.

Share All sharing options for: What We Learned In Toronto

Don't panic. While the Rangers lost five straight games at practically the worst possible time in their hopes of playing more home games than road games in the playoffs, they also bounced back to split this series with the Blue Jays without any contributions from Elvis Andrus, Josh Hamilton, or Cliff Lee. The Blue Jays are no slouch. If they played in the AL West they would currently have a lead over the Rangers. So the Rangers putting the losing streak behind them to come away no worse for wear against Toronto is a good sign for those whose mood has soured on the team due to this recent stretch of bad results. The best news of all is the Rangers are coming off this tough stretch with a winning streak.

The Rangers are now 2-9 on artificial turf. Therefore, they began the year 0-9. That's a small sample, but I think this team does struggle indoors likely due to playing so irregularly in those conditions now. The Jays and Rays are the only two teams remaining with turf and it's not a coincidence that they likely have the two home crowds with the worst atmosphere. Artificial turf has come a long way from when it was basically Easter basket grass over some concrete, but I'll be supremely happy when the day comes that all baseball is played on the real stuff.

Your thrice-yearly Blue Jays are ungodly hot against the Rangers: 24 home runs in 11 games.

For the first time all season the Rangers had a lead off home run thanks to Ian Kinsler's return to the lead off spot with Elvis Andrus out of the line-up. As well as Andres Blanco has filled in at second base recently, the line-up is just different when Ian Kinsler is in it. Sure, he'll frustrated you when he gets in those funks where he pulls everything straight up for an infield pop-up and then does the bat-flip/mope to first base. But when Ian is hitting and getting himself on base, he is dynamic. The roughest stretches of the season has been the two times Ian has been out of an extended amount of time. I don't think that's a coincidence.

Derek Holland is not one of the Rangers pitchers who allowed a home run to the Blue Jays this season. That is encouraging.

Colby Lewis won his first game in almost two months. Considering he's pitched well in all but a couple of his starts in that stretch, it's pretty amazing that a drought such as that lasted as long as it did. Someone on the team must have wrangled with an elusive Canadian slump-buster for Colby.

What did we learn in Toronto? 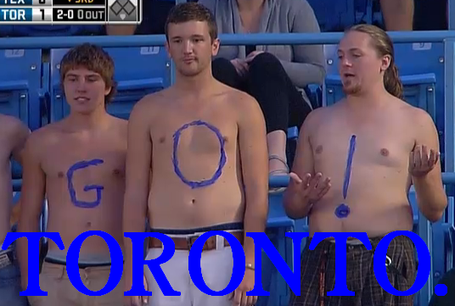 It's good to be gone.