Pitching match-ups favor the Rangers heavily in a likely preview of the first round of the playoffs.

Share All sharing options for: Rangers Look For Practice Against Likely October Opponent

Against the Twins, the Rangers played likely their last big series of the season. They were swept.

The Rangers now play likely their last series of any significant meaning to either team for the rest of the regular season against the Yankees. At this point, the Rangers don't have much to play for, but the Yankees are still playing for their division.

More importantly, however, this is one of those "If The Season Ended Today" series. If the season ended today, just like in every other season that saw the Rangers going to the playoffs in the history of the franchise, the Rangers would be traveling to New York to begin their postseason against the Yankees. This is a warm-up of sorts, a chance for the Rangers to size themselves up against their opponents the next time they're playing super-meaningful games.

Okay, not exactly. The Yankees will likely be throwing better pitchers at the Rangers when that comes, and the Rangers' best player likely won't be injured, either. And there won't be three games in Texas. But, there's still something of a preview going on here.

This series preview starts with an introduction to the best Yankees this year in FanGraphs.com's stat "Wins Above Replacement." It is, essentially, their estimate of how much a given player has produced, in terms of wins, above a back-of-the-roster scrub given the same playing time. There's a glossary at the bottom of this post if you see any stats you're not familiar with.

The Yankees really aren't any more formidable at the top of their roster than the Rangers are. The difference between the two squads is primarily depth among position players.

At one point, Cano was making a run at Josh Hamilton for the AL WAR lead, but that campaign looks to be over, even with Hamilton missing time.

By the way, while we're on the subject, let's compare the top four Yankees starters this season to the top four Rangers. . .

If this is the first round of the playoffs, the Rangers may well have the significantly better starter in every game. Derek Holland, by the way, is at 0.4 and Tommy Hunter is at 0.1. 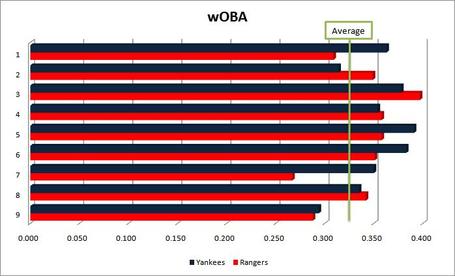 Remember how I said depth among position players? Not only do the Yankees have roster depth, but their lineup goes deep. If Jorge Posada, who is questionable with concussion-like symptoms, plays, then they have an above-average hitter at every single position but No. 2. That guy is Derek Jeter.

The graph above compares each likely starter in the series to his opposition in weighted On Base Averge (OPS with better weights on an OBP scale). The Rangers's offense with Josh Hamilton isn't too far behind, but it is behind. Even without Hamilton, the Rangers do edge the Yankees at a few spots in the order, but the sheer depth of the Yankees is enough to make their offense comfortably superior. There is no relief for opposing pitchers here, only danger. 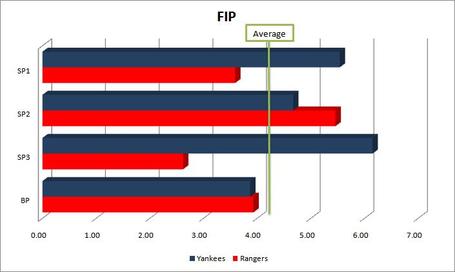 The bullpens are similar, with the Rangers being a tad deeper and the Yankees being stronger at the back. There is a shot against the Yankees' pen in the middle innings, but coming back in the last couple can be difficult. Their closer is a dude named Mariano Rivera, and he throws a "cut fastball" almost exclusively. It works out for him.

The pitchers in the above graph are compared by Fielding Independent Pitching; what their ERA would likely be with a normal defense and normal luck. 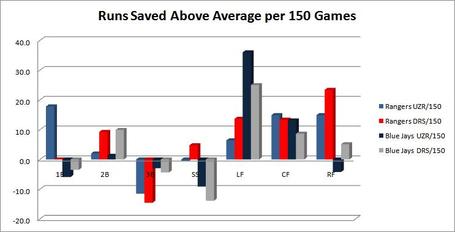 The Rangers probably have a slight advantage in the field, but not much of one. As discussed, the have a major pitching advantage, while the Yankees have a major hitting advantage. The last question is what that means for our expectations in the series.

Here's what a simulation says: 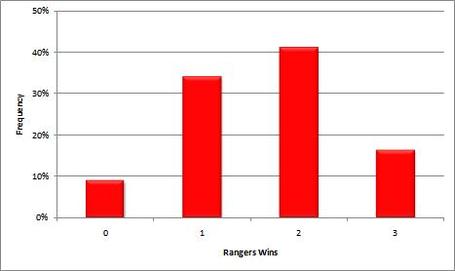 The series is at home, though, and that makes a difference, taking the series from a coin flip to a slight Rangers advantage. The sim expects the Rangers to win the series just over 57% of the time, with a sweep more than 16% of the time.

Would winning this series mean the Rangers are the favorites when the playoffs start? Of course not, but it would be nice to see. And here's some evidence that it's not only possible but fairly likely. Not overwhelmingly so, and merely getting one win here should be nothing to hang your head over, but you also shouldn't be going in to this series with any sort of dread. The Rangers' have struggled lately, but pitching match-ups are hugely important.