What We Learned In Oakland

Playing .500 ball on the road should be enough to get the Rangers where they're going. However, the new race is for home field advantage in the American League Division Series.

Share All sharing options for: What We Learned In Oakland

Brett Anderson, Gio Gonzalez, and Trevor Cahill. These guys are why the AL West is going to be a difficult division for years to come. They're all good, and they're all young. Coupled with the fact that the Angels have money to play around with and have already made some moves to make their team better for the next few seasons, there's no reason to assume the Rangers will just walk away with the division for the next half decade.

With that said, I fully expect the Rangers to walk away with the division this season. And even though I want them to win every time they take the field, that's not going to happen. The Rangers did what they needed to do in this series, they won a game. Sure, you'd love to see them sweep and essentially put the West out of range for good. FOX couldn't manufacture an ounce of false drama if the Rangers swept the series. There's something to be said about taking away the dangling carrot for good. However, in my eyes, the ultimate goal was to not get swept. Seven and a half games is a huge, huge lead for nearing mid-August. Eventually, it's going to become not just about the lead, but about the number of days remaining in the season. The A's are running out of time and the Rangers doing enough to not get swept was essentially a win.

Is it just me or does it seem like playing in Oakland is a punishment of sorts for teams? Teams on a road trip to Oakland always stay in hotels in San Francisco. (Granted, where else would they stay? The Oakland Airport Hilton?) They then make the trek over the Bay Bridge to East Oakland with a final destination being Oakland-Alameda County Coliseum. That bus ride has to feel like that final ride from county lock-up to federal prison. At least the field at the Coliseum is beautiful and they know in couple of hours they can get a stay of execution. If you're an A's player, however, it must feel like you're one cross word from going to the hole for a long, long time.

I've supported Rich Harden almost unconditionally since he signed with the Rangers. Even through Smilegate, I was by his side. I knew something was wrong, of course. But I hoped he would figure it out and pitch even a little like he has his entire life and give the Rangers, rather than the ace they thought they might have gotten, a really solid guy to run out there in the fifth spot.

After he came off the disabled list two weeks ago, he was encouraging in Anaheim. There was reason to assume the things he said he had been working on with Mike Maddux were paying dividends. He wasn't the Rich Harden the Rangers paid for -- three Ks in seven innings are usually reversed for Harden. However, he looked like he could be that No. 5 guy with upside. Then Saturday rolled around, and by the end of the first inning, it was pretty clear that no one, including Harden himself, knows what is going to happen when Rich Harden takes the mound.

I'm on board with a final start-by-start trial where Harden earns himself another start only by pitching well. However, if Rich Harden is going to implode every five days, it's time to go with Derek Holland.

So what did we learn in Oakland? 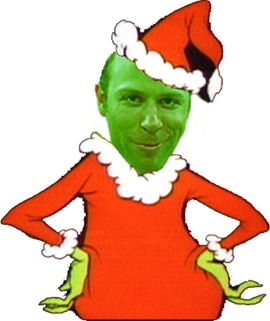 Cliffmas was nearly ruined by the Grinch.