The A's once again present a formidable, and perhaps underrated, opponent for the Texas Rangers. And just like the last series, losing isn't really a big deal, but winning would be nice.

In what has become a running theme for the Rangers during this part in the season, we have yet another game against an opponent they've already played recently. So, obviously, we already know the A's pretty well. They are a solid team with quality pitching and fielding and an underrated offense who pose a threat to the Rangers over a three game series at home.

They're also the Rangers' biggest competition for the division right now. Which is to say, they're not much competition at all, but nothing is over yet.

Unfortunately, I was in bed early last night and will be gone most of today, so all the stats below are prior to Friday's game. Hopefully, that doesn't make much of a difference.

This list is ordered by Wins Above Replacement via FanGraphs. As usual, if you see a stat you're not familiar with, please consult the glossary below.

Oakland has a whole lot of solid players who probably don't get enough attention. Not many of them are stars, but they are pretty good. Not far off this list but still having good years are guys like catcher Kurt Suzuki, DH Jack Cust, utility man Adam Rosales and they're only, All-Star Trevor Cahill.

Alright, let's start with a look at the two opposing batting orders. 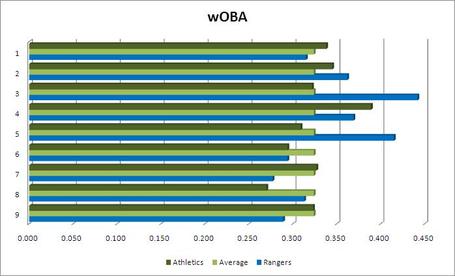 With two lefties on the mound, I'm assuming Jorge Cantu will get most of the time at first base. You can see, looking at the back of the Rangers order, a partial representation of why the Rangers' offense has been struggling and is likely to continue to do so, at least compared to their own lofty standard. Five straight hitters in the Rangers' order right now are having below-average seasons at the plate (and on the bases). Guzman is a good bet to improve and is a nice stop-gap, Cantu is likely going to be better than what Texas has been getting there and Andrus is solid for a shortstop, but five straight spots in your lineup where you're not even getting mediocre output is going to lead to a lot of back-to-back scoreless innings and killed rallies.

It's also important to note this comparison is not park-adjusted (though the final projections include that). Oakland suppresses offense quite a bit, while Arlington inflates it. Despite the killer heart of the order, the current state of the Athletics' offense is comparable to, if not better than, the Rangers'. This is likely to change with some regression and when Ian Kinsler comes back healthy, but while you may laugh at the numbers the A's have put up over the course of the season, at the time of this series, it's not a weakness. 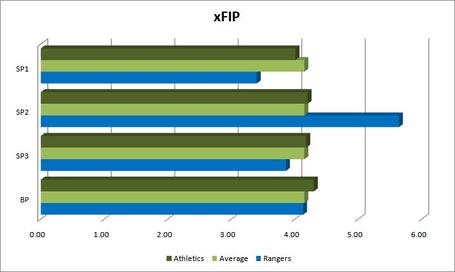 Gonzalez has pitched the Rangers well in the past, meanwhile, and goes up against a serious wild card this series. Harden may just be a lot better than his 2010 line so far going forward, after returning from injury. His first start against his old teammate went well, now he gets a chance to continue that against his old team.

On another note, the A's will have closer Andrew Bailey available after a DL stint for this series. They'll need him to keep the difference in bullpens from being even more dramatic. 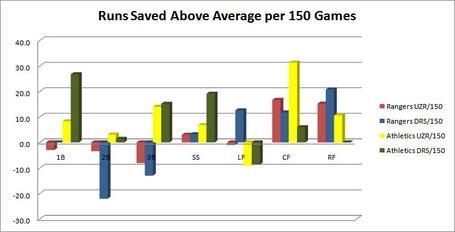 Just a quick glance at how well the fielders going in this series have been playing in this season. As usual, there's a whole lot of sample size questions here, so take this with a grain of salt.

Both teams have been good at preventing runs this season in the field at a fairly similar rate. Some of that came from Ian Kinsler for the Rangers, however. Guzman should probably not continue to play this poorly at second, but so far he's been dramatically worse than Kinsler. Much like the Seattle series, fly balls will be murdered these next three games.

Oh, and Matt Watson has such a small sample size I used his career rate up there.

Alright then, plugging these match-ups in to a simulation (including park adjustments and home field) gives us: 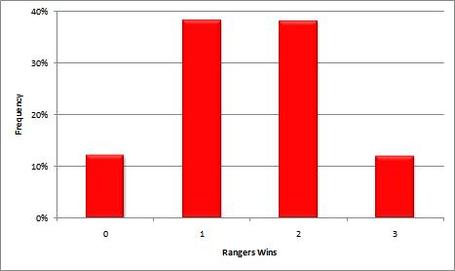 A tight series that ever so slightly favors the A's.

Games one and three comfortably favor the Rangers, while game two very heavily favors the A's. And this is where Rich Harden can make a big difference. If he can, in fact, come back from his DL stint strong, he tilts this series dramatically in the favor of the Rangers, as the difference between he and Lewis/Lee is the only thing that keeps these odds close, let alone giving Oakland the edge.

Despite the differences in the record, these teams just are not that wide apart right now. At home in the last series, the Rangers were slightly favored and won two of three and outscored the A's by three. Switching to the road is enough to tilt those odds towards the A's, but it's still extremely close. It's important to remember, though, that losing two of three to a good team on the road is far from a failure. And when you already have an 8.5 game lead on that team, losing two of three isn't even a big deal.

And the point here isn't so much that we should expect the Rangers to lose the series (again: coin flip). It's that we should be genuinely happy if they don't, and it's no big deal if they do.